Breast Cancer and Other Nutrients 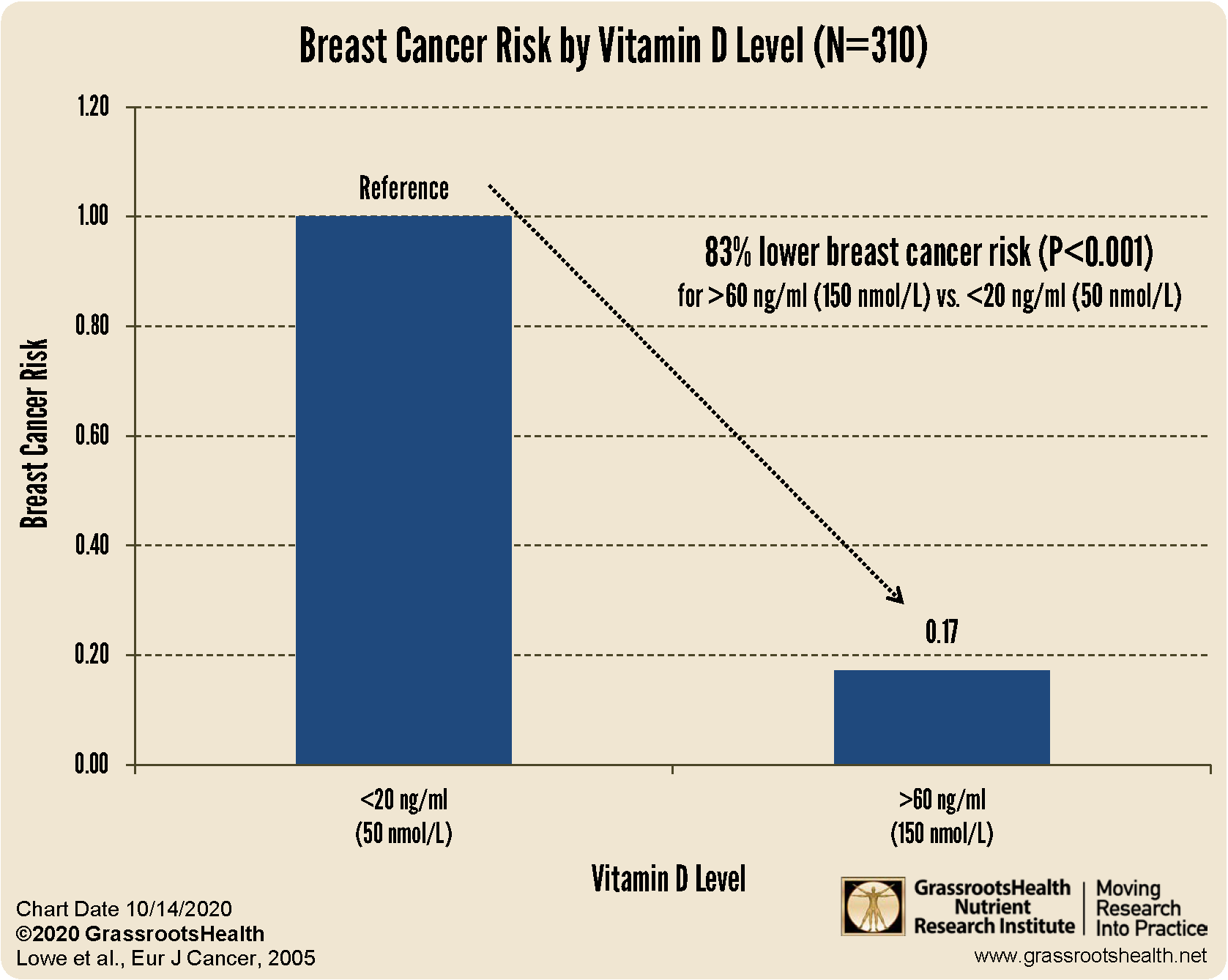 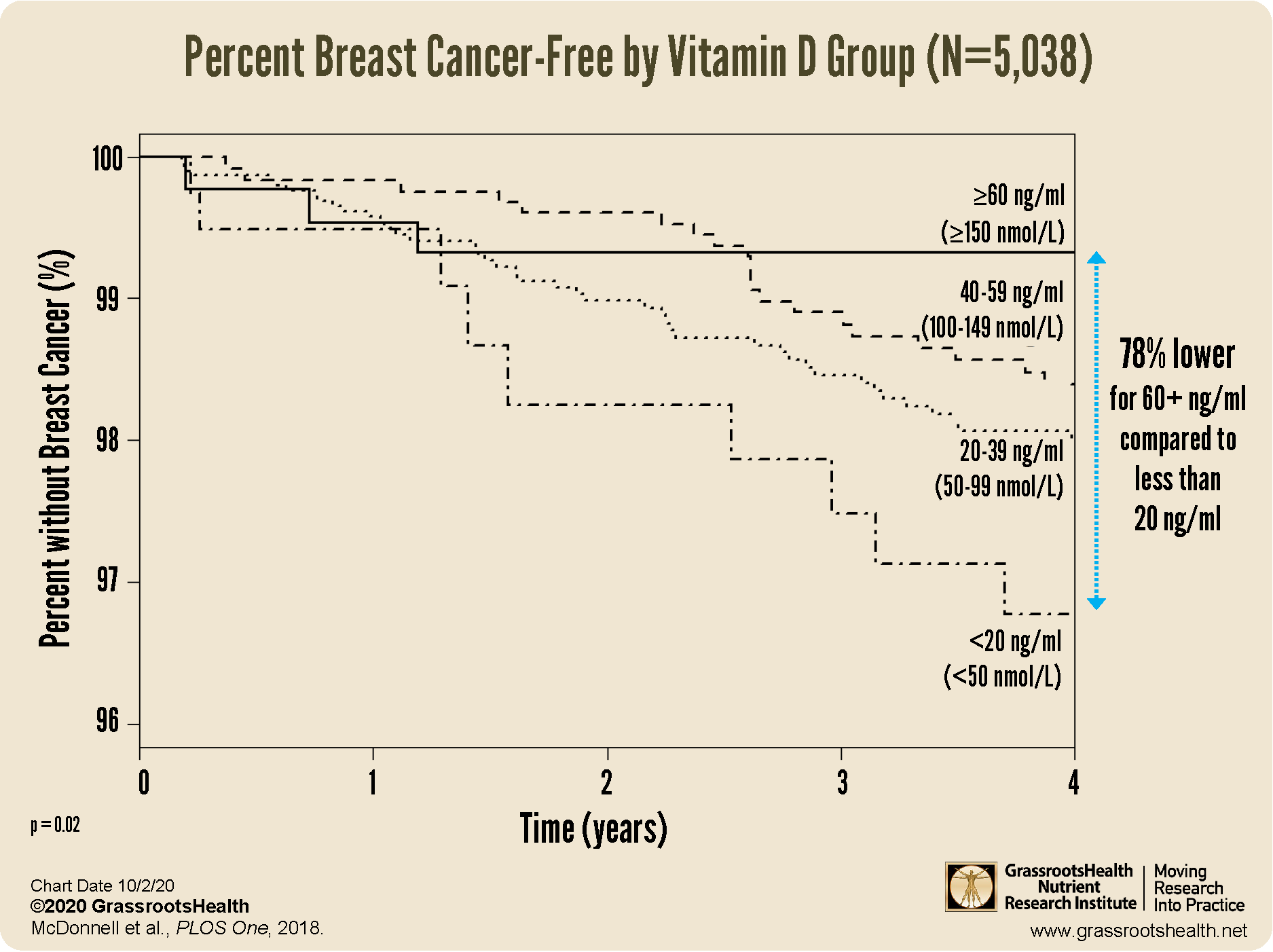 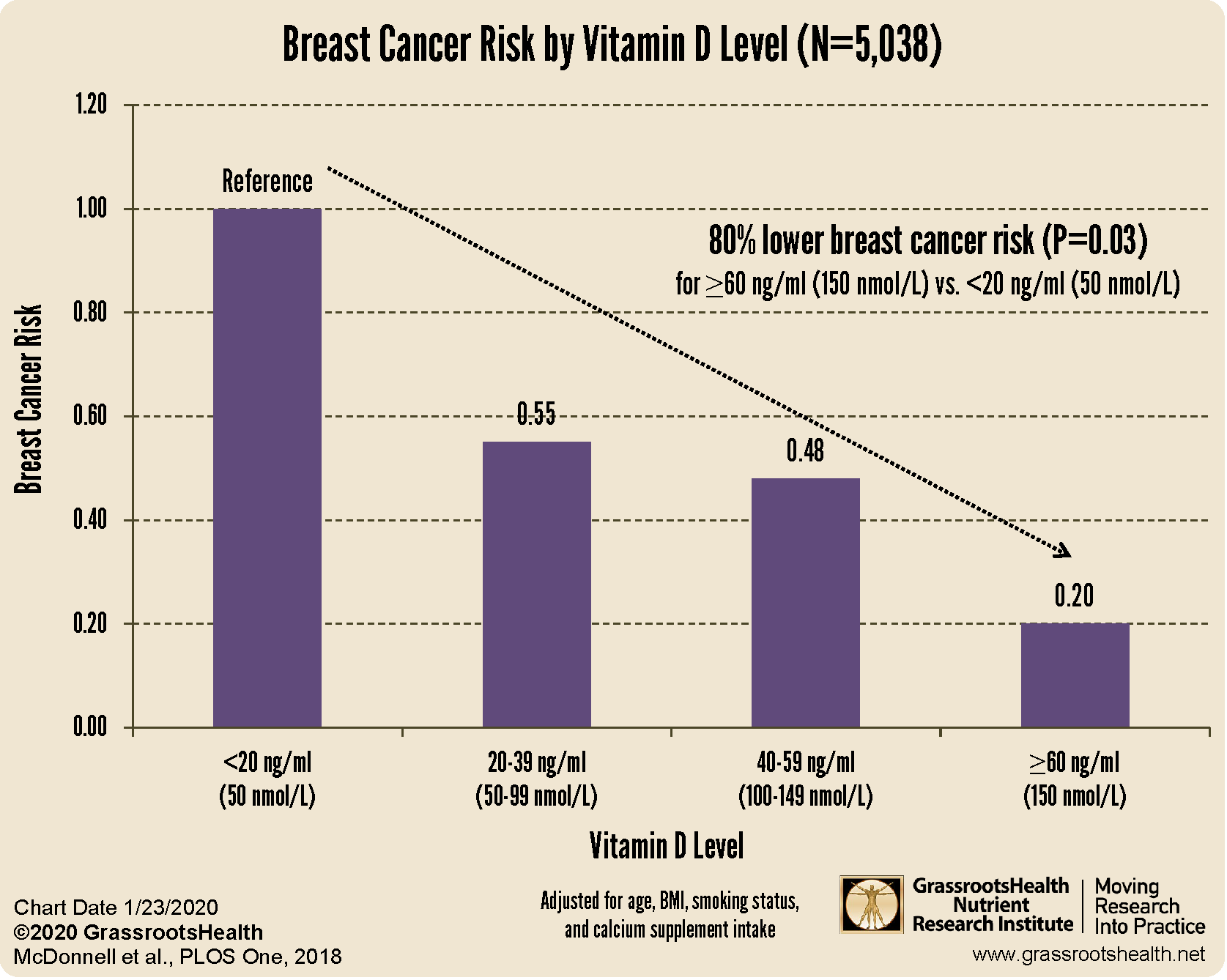 Additionally, since breast cancers diagnosed in the first year were likely present but undiagnosed at the beginning of the study, we also repeated the analysis with only those without breast cancer at one year. We found that those with vitamin D levels at or above 60 ng/ml had a 93% lower risk of breast cancer compared to women with levels less than 20 ng/ml. 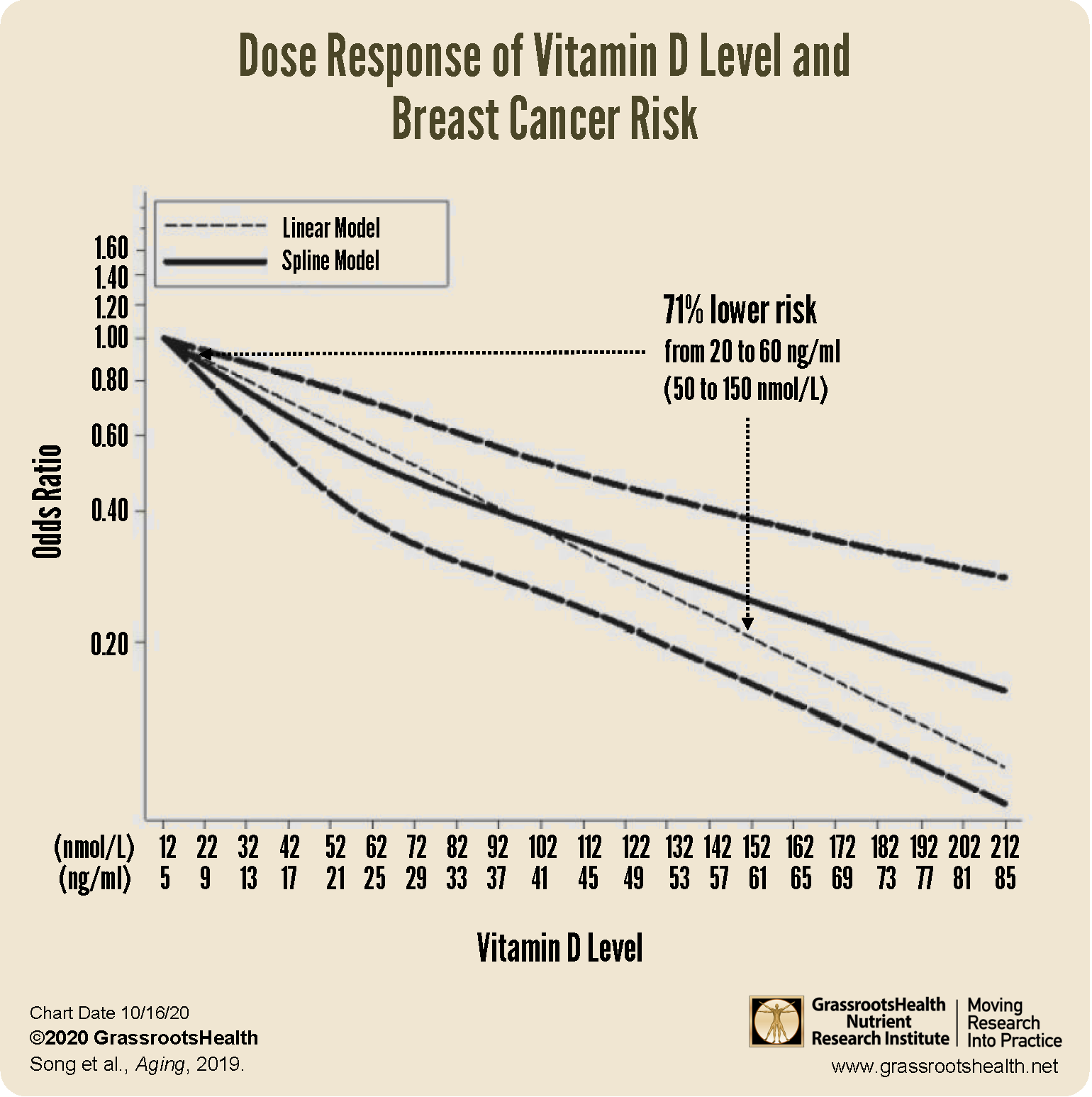 A 2019 meta-analysis by Song et al. analyzed data from 70 observational studies, and found a dose response relationship between vitamin D level and breast cancer risk. Specifically, the researchers found a 6% decrease in breast cancer risk for every 2 ng/ml (5 nmol/L) increase in vitamin D level. This translates to a 71% lower risk from 20 to 60 ng/ml (50 to 150 nmol/L).

A 2013 case control study at UCSD School of Medicine, Mohr et al. found that the three months prior to tumor diagnosis was a relevant window of time for cancer prevention and that those with vitamin D levels ≥35 ng/ml had a 70% reduction in risk of developing breast cancer than those with levels <15 ng/ml.

In a 2012 case control study, Yao et. al. found that women with 25(OH)D levels ≥30 ng/ml had more than a 60% reduction in breast cancer risk compared to women with levels <20 ng/ml. Among post-menopausal women, there was a 71% reduction.

In a 2009 case control study, Abbas et al. found that women with 25(OH)D levels ≥24 ng/ml had more than a 50% reduction in risk of pre-menopausal breast cancer compared to those with levels <12 ng/ml.

In a 2009 case control study, Rejnmark found that pre-menopausal women with 25(OH)D levels ≥34 ng/ml had more than a 60% reduction in breast cancer risk compared to women with levels <24 ng/ml.

In a 2009 case control study, Crew et. al. found that post-menopausal women with 25(OH)D levels ≥40 ng/ml had more than a 50% reduction in breast cancer risk compared to women with levels <20 ng/ml. 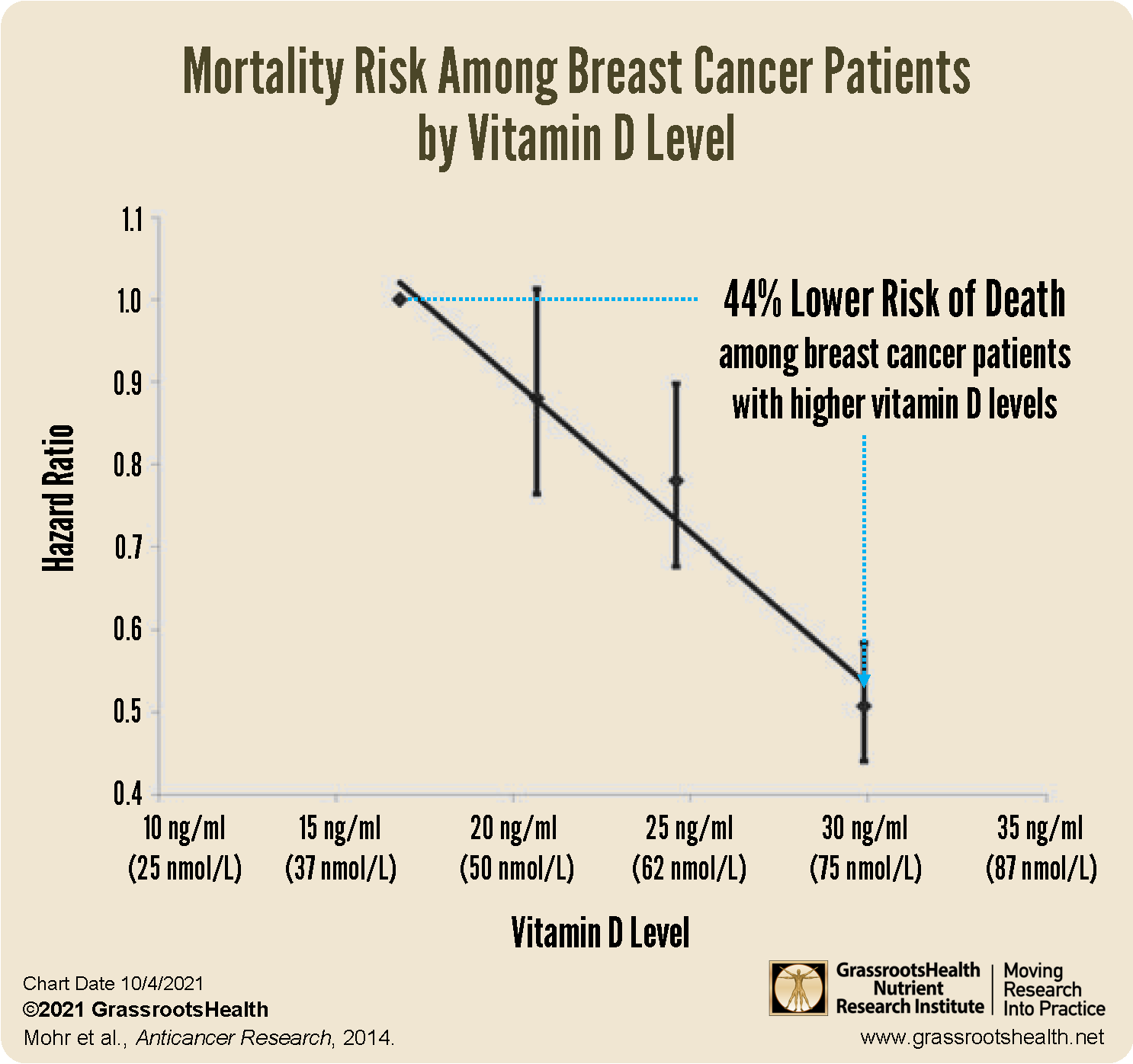 Yao et al. summarized initial findings from a 2021 study involving women diagnosed with incident invasive breast cancer between 2006 and 2013, and their risk of death. This study found that women whose vitamin D level at the time of diagnosis was 30 ng/ml (75 nmol/L) or higher had a 27% lower risk of death compared to women whose vitamin D level was below 20 ng/ml (50 nmol/L). In this study, black women had the lowest vitamin D levels, which the authors suggest is a major contributor to their poorer survival outcomes. Breast Cancer and Other Nutrients – Summary of Research 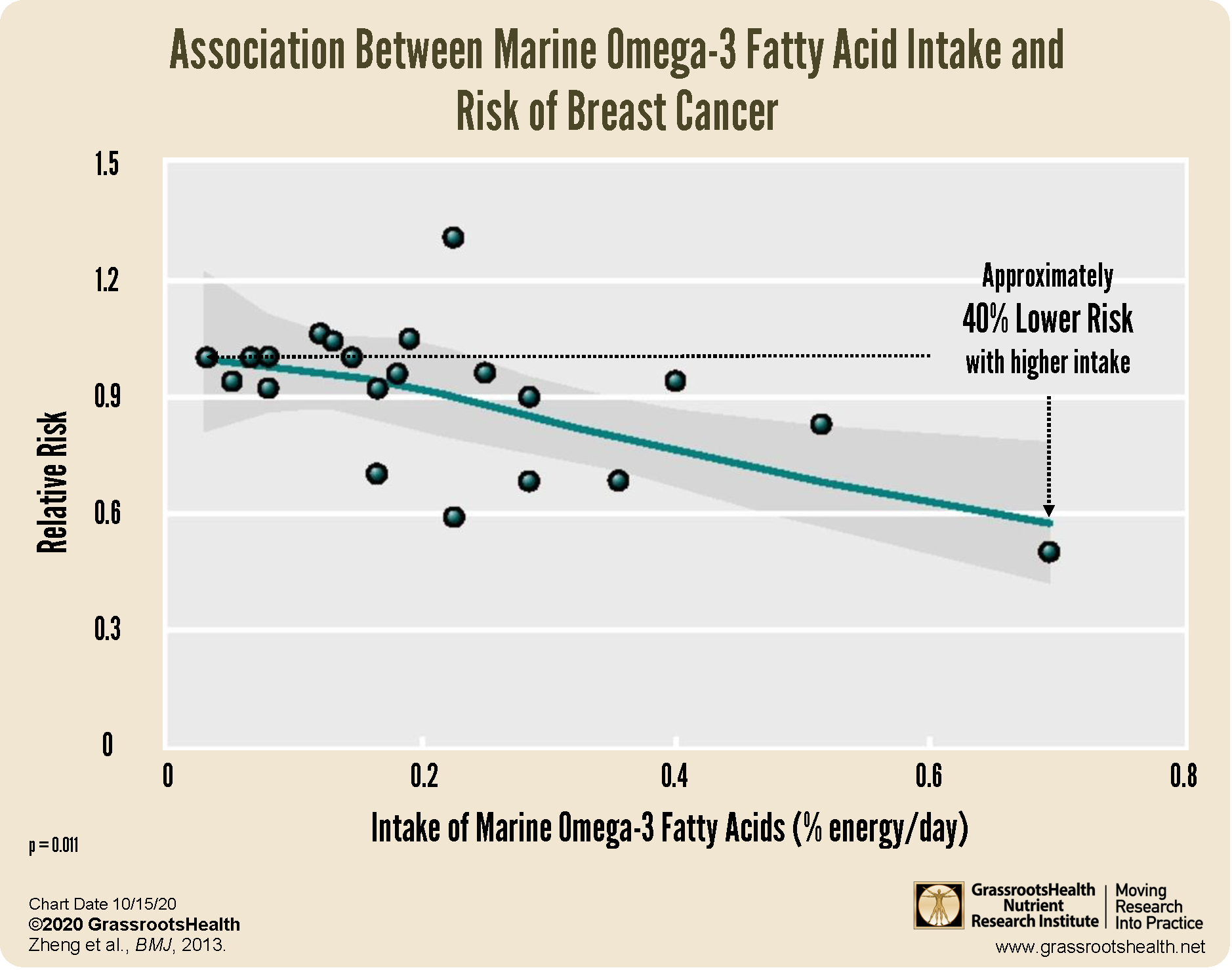 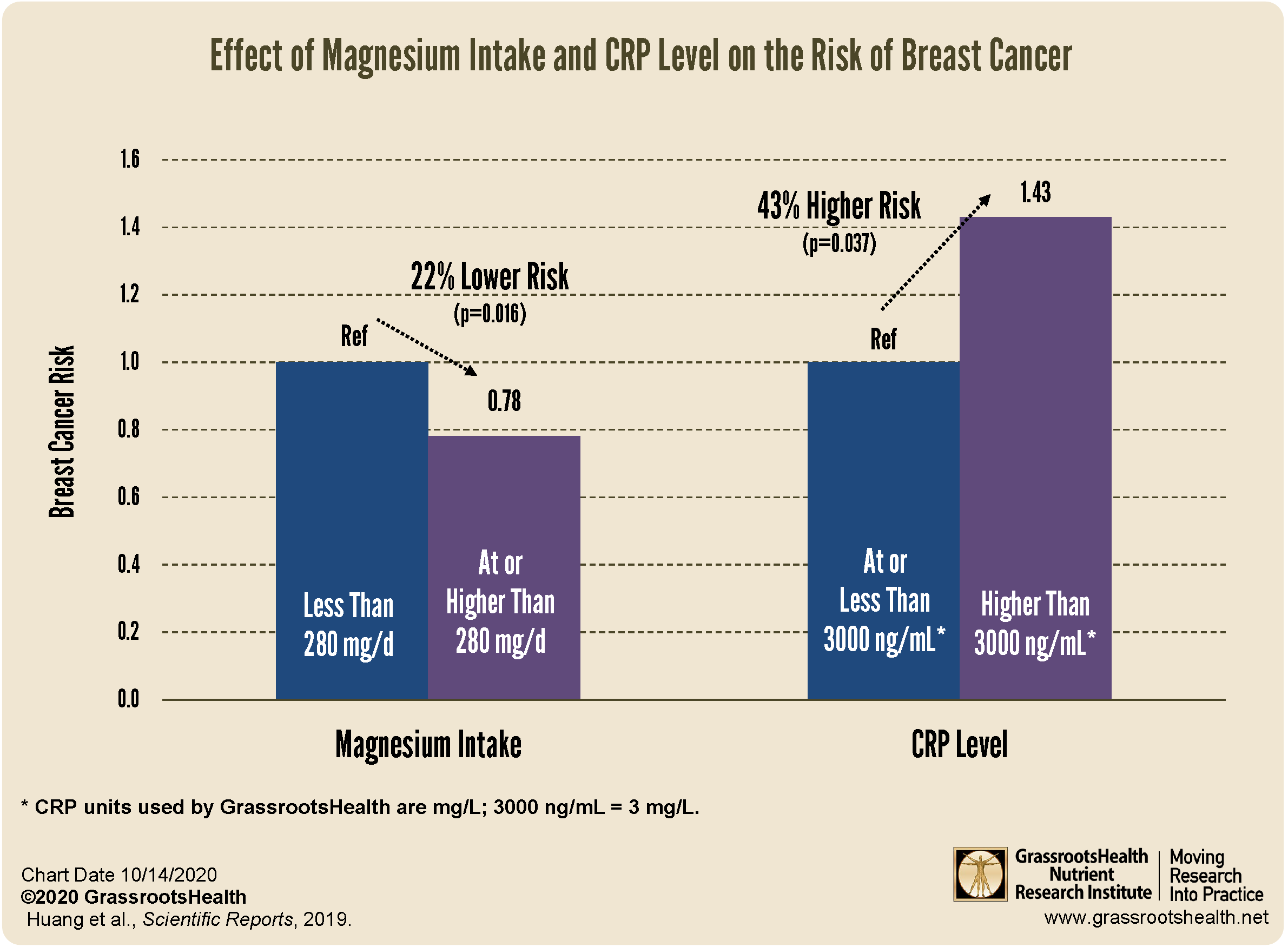 22% Lower Breast Cancer Risk with Magnesium Intake at or Above 280 mg/day vs Below (Huang et al.) 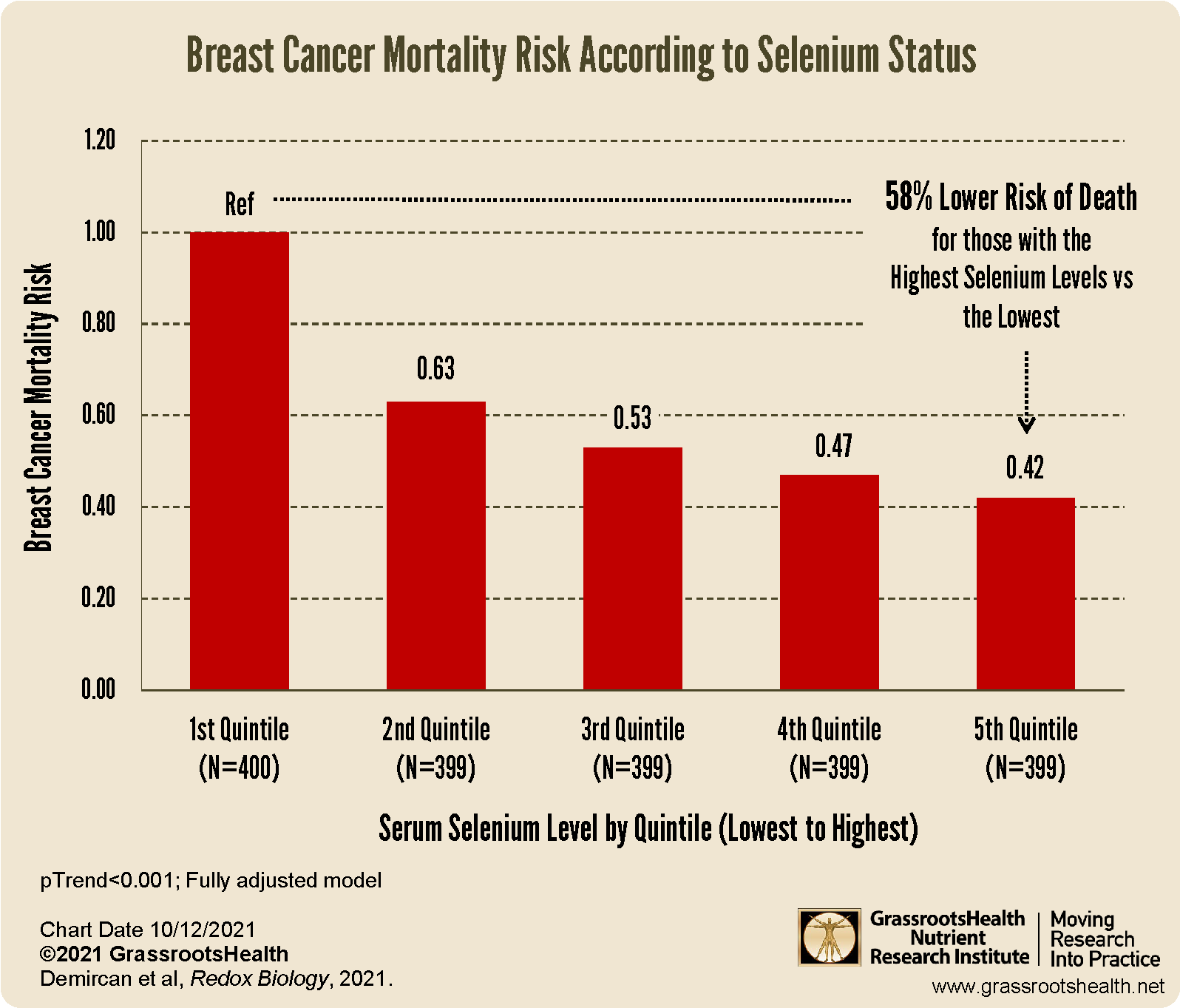 When considered together, all three selenium biomarkers were better at predicting mortality than three of the most important tumor characteristics. 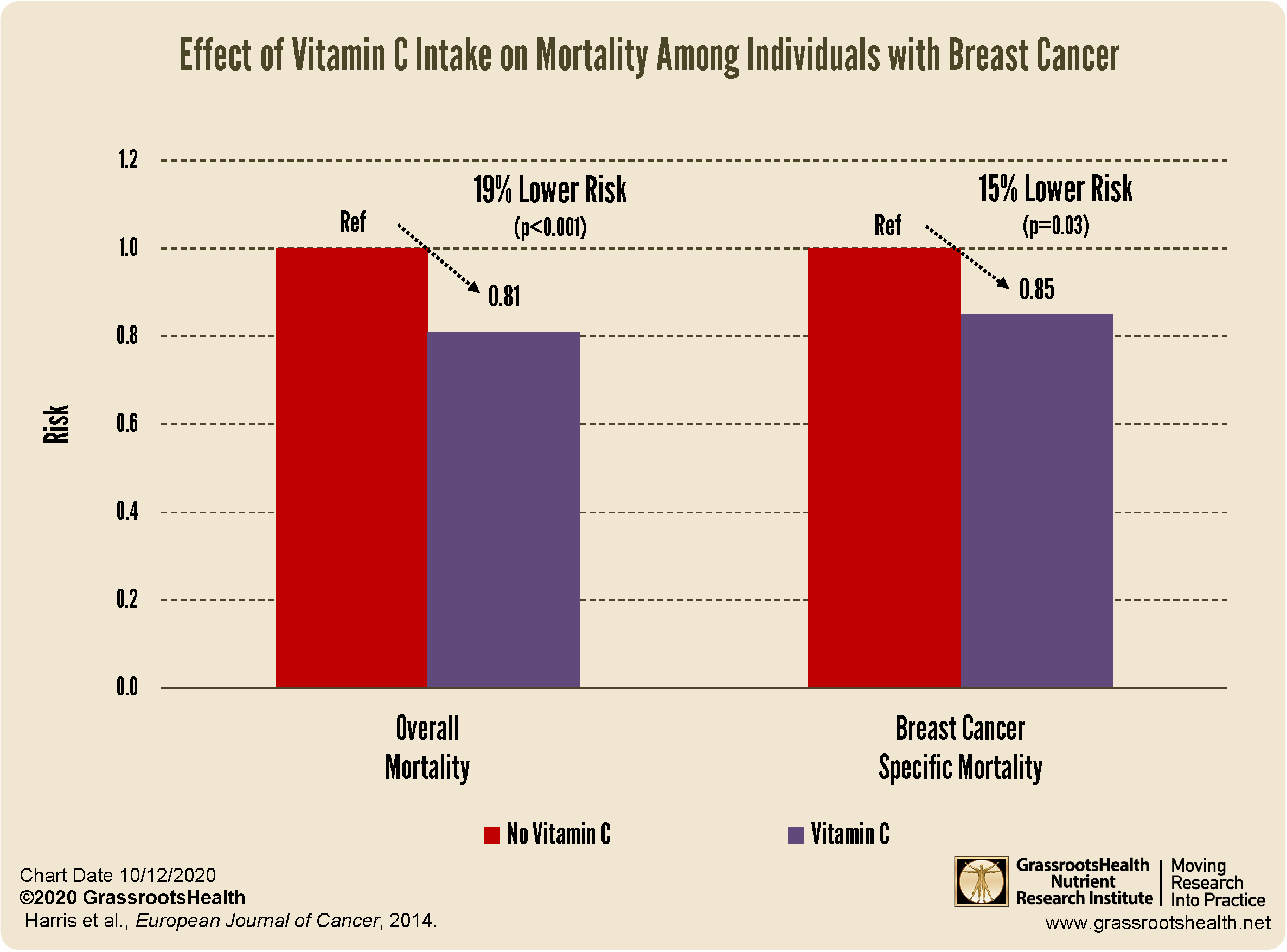 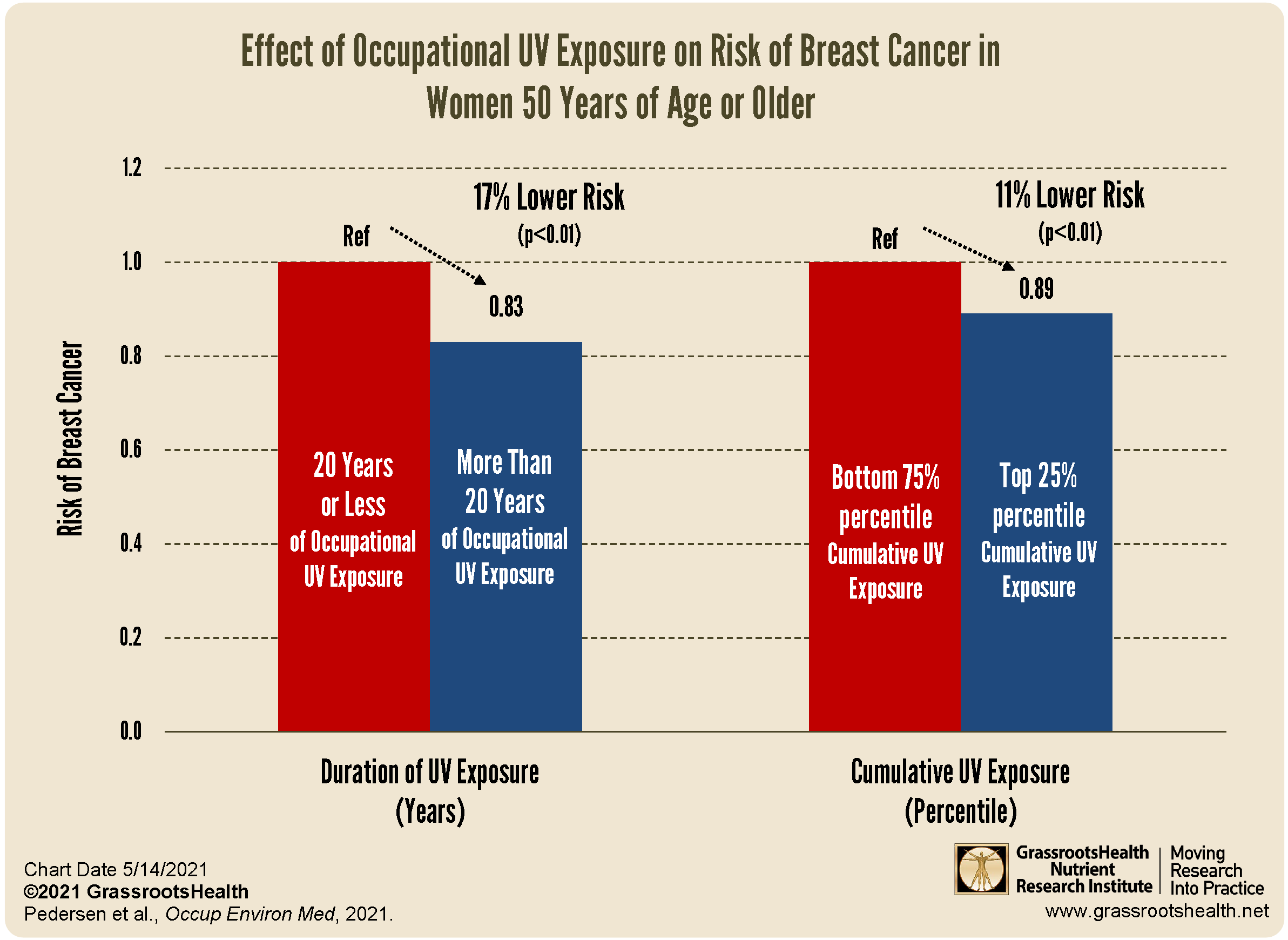 A study by Pedersen et al. included data from 38,375 Danish women, 70 years of age or younger, who had been diagnosed with breast cancer, and 191,875 controls who were breast cancer free. They looked at the employment history of all the women to see if there was a correlation between breast cancer incidence and long-term, occupational UV exposure. They found a 17% decreased risk for late-onset cancer (diagnosed at 50 years or older) with longer duration of UV exposure (more than 20 years exposure) and a 11% decreased risk with higher cumulative UV exposure (top 25% percentile of exposure). Also, the researchers found a 15% decreased risk overall associated with longer duration of UV exposure (more than 20 years) for all diagnosis ages combined. 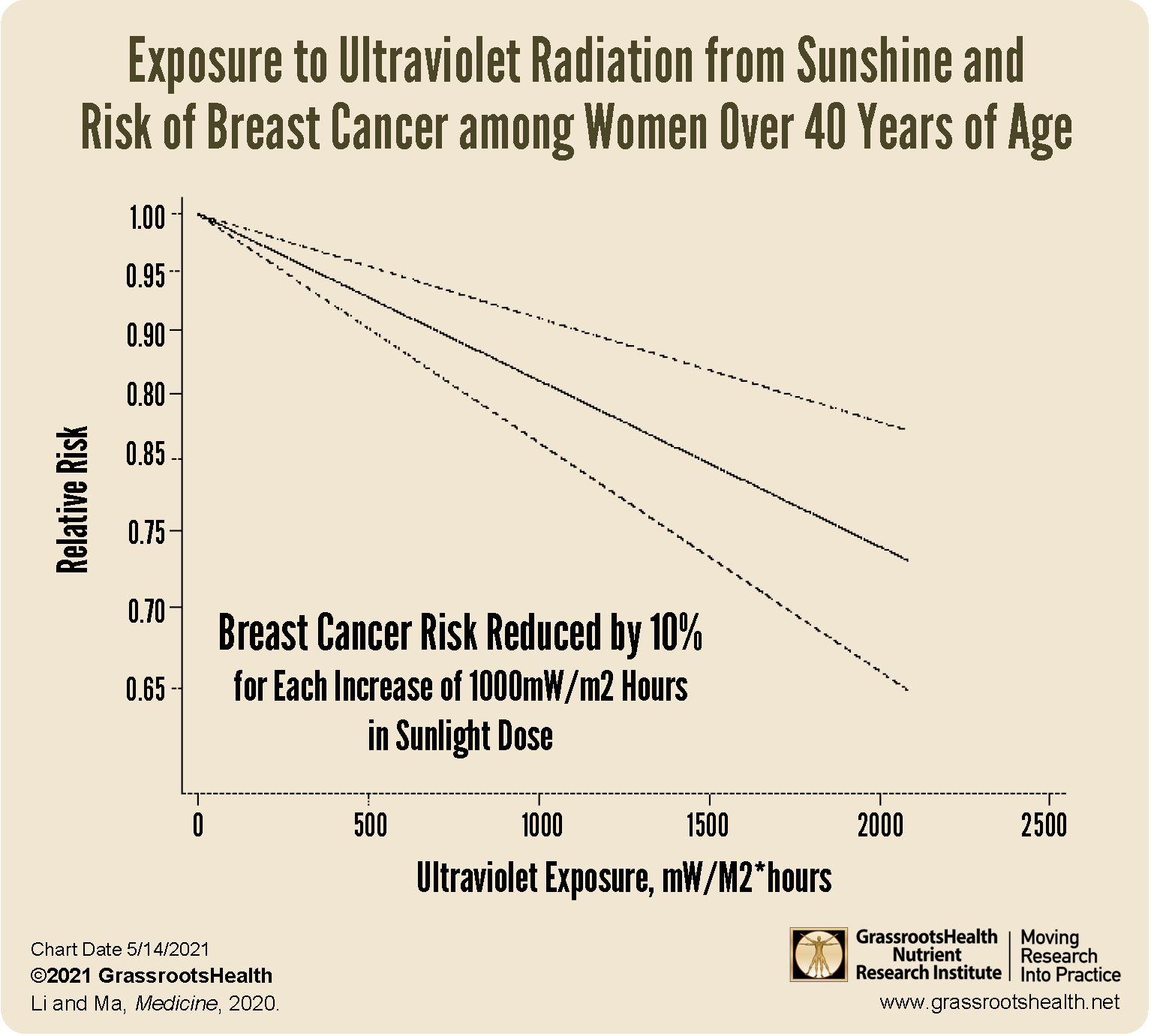 A review by Buja et al., which analyzed 48 different studies to assess the association between specific foods and dietary patterns and the risk of breast cancer, found that diets high in refined sugars, saturated fat, and alcohol (such as the Western Diet) increased breast cancer risk, while the Mediterranean diet, which is high in fish, fiber, healthy fats, vegetables, antioxidants and extra-virgin olive oil, was found to have a protective effect reducing the risk of breast cancer. This protective association was stronger among postmenopausal women, and when alcohol was excluded from the diet. A protective effect was also seen regardless of body weight and BMI among some studies. 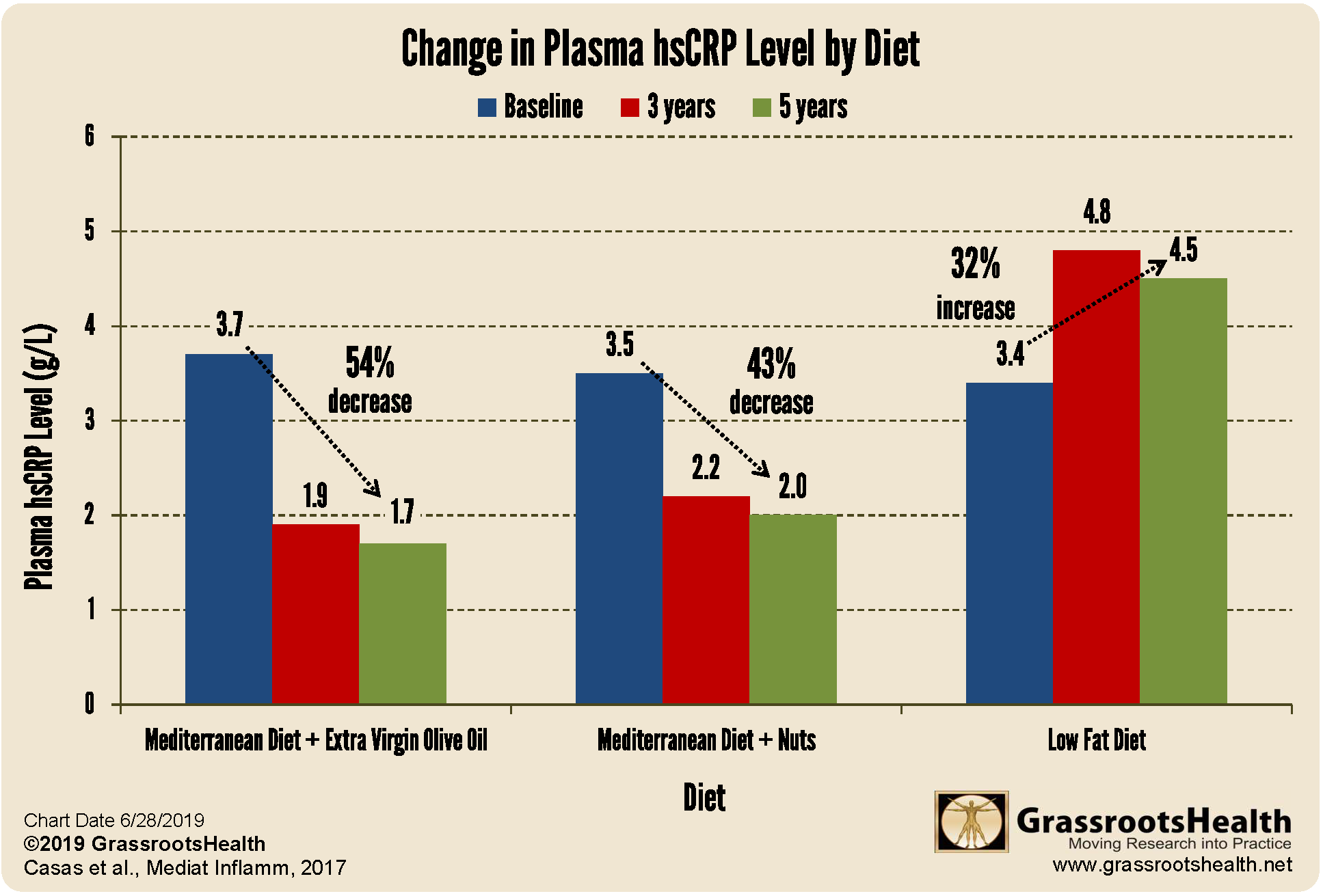 As noted by Huang et al. above, CRP levels less than 3000 ng/mL had a 30% lower risk of breast cancer than those with levels at or above 3000 ng/mL. Research has established a consistent correlation between diet and inflammation, such as that done by Casas et al. on the Mediterranean diet (MedDiet). This particular study demonstrated the effects of diet on inflammation among 165 participants who had a high risk of cardiovascular disease. The participants were randomly split into three groups and had to follow a specific diet for 5 years: one group was put on a Mediterranean Diet supplemented with olive oil, another on a Mediterranean Diet with nuts (walnuts, almonds, and hazelnuts), and one on a low fat diet. Both groups on the Mediterranean Diet experienced decreased inflammation (as measured by hsCRP), while the low fat diet group did not. 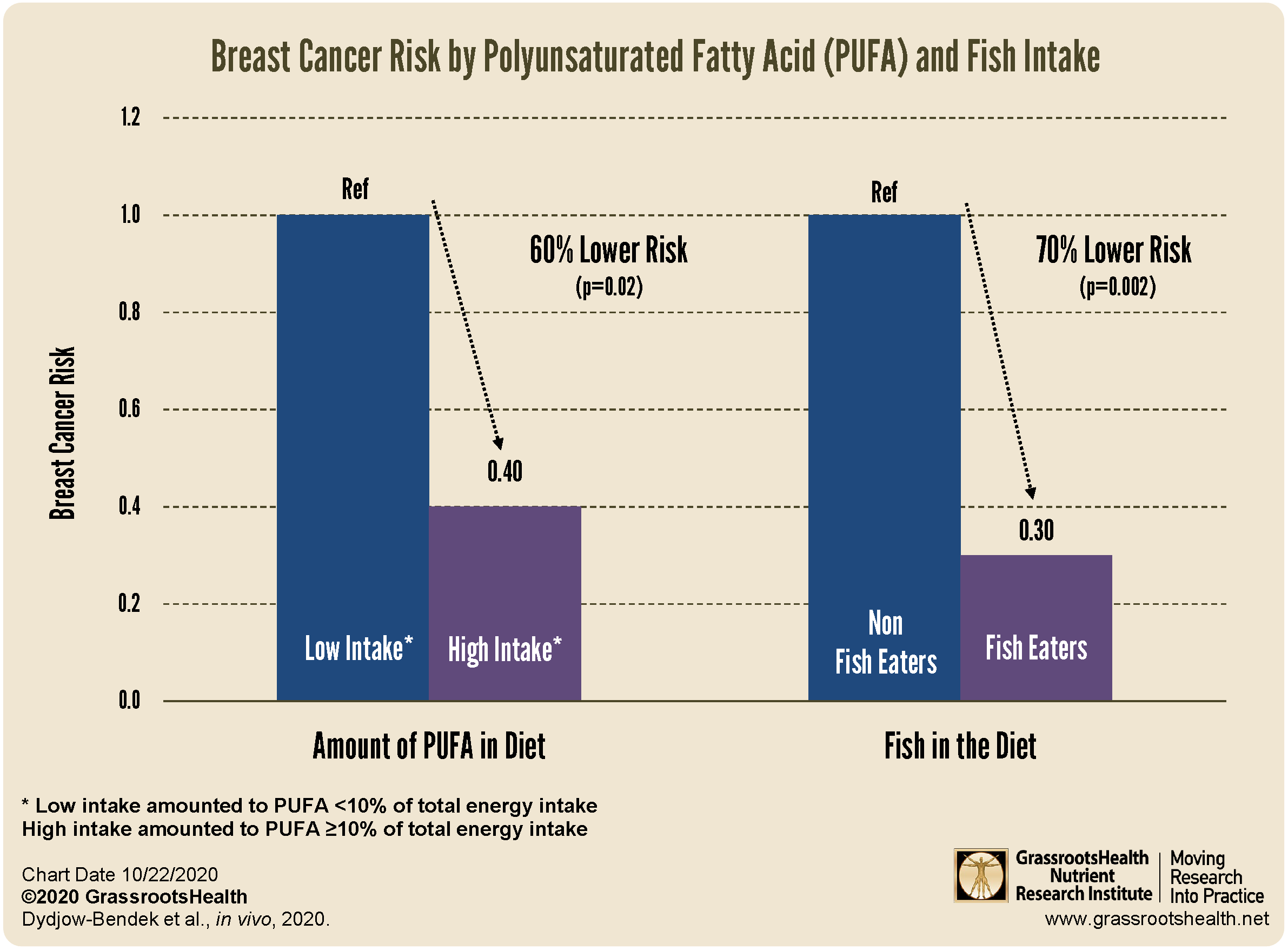 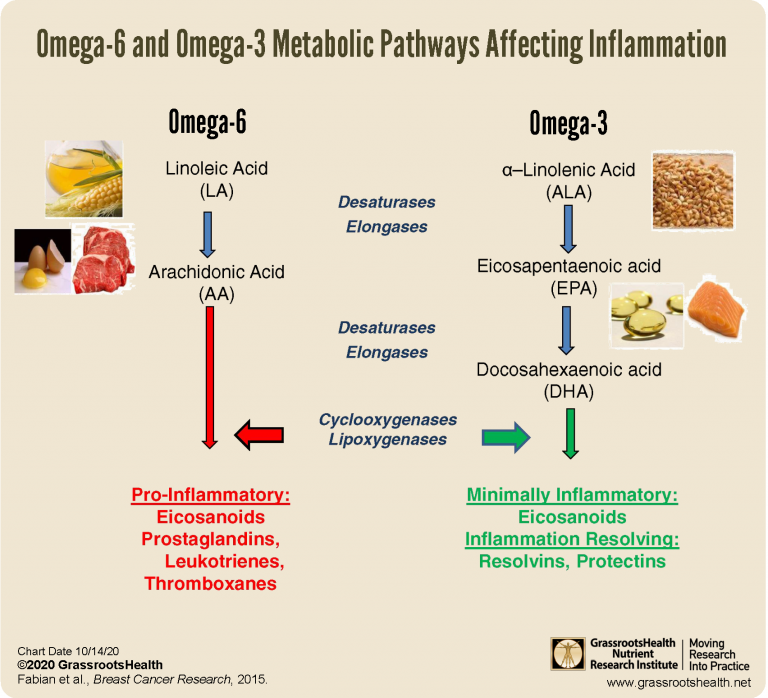 According to Fabian et al., the average intake of omega-3 fatty acids EPA and DHA is approximately 100 mg/day (from fish or supplements), and the average intake of omega-6 fatty acid AA is around 250 mg/day (from foods such as eggs, meat, and poultry). In order to have a better balance of pro-inflammatory AA to anti-inflammatory EPA + DHA within the tissues and cells of our bodies, the authors estimate an intake of about 2,000 – 3,000 mg/day of EPA + DHA would be needed in order to reach an omega-6:omega-3 ratio that would result in lower levels of inflammation.

GrassrootsHealth scientists recommend an Omega-3 Index of 8% or higher, which may be more equivalent to an AA:EPA ratio of around 9 or less. A GrassrootsHealth analysis found that ~1,300 mg/day of EPA+DHA was needed for 50% of the population and ~1,900 mg/day was needed for 90% of the population to achieve and Omega-3 Index of 8%. To reach an AA:EPA ratio closer to 2 or 3 would likely require achieving a higher Omega-3 Index and a higher daily dose of omega-3s and lower intake of omega-6s. 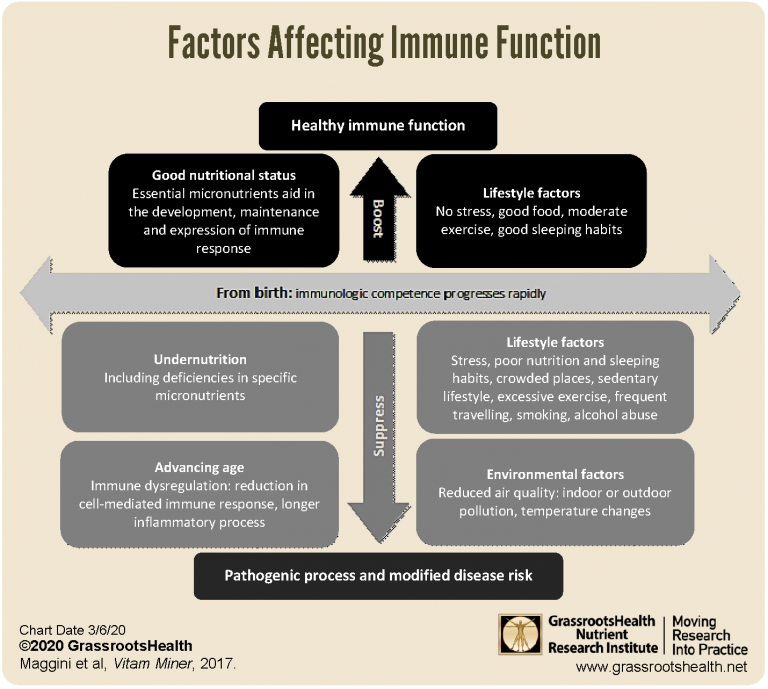 Other Factors Contribute to Health & Disease

Some risk factors common for many diseases that can be controlled to some extent include diet, exercise, weight, smoking, stress, and alcohol consumption. Health outcomes can be affected by taking steps to keep each of these risk factors within a healthy range. Genetic components and our environment can also affect our risk of many diseases. As with the benefit of vitamin D, each risk factor has a varying level of influence depending on the specific disease in question.

Could Your Overall Health Benefit from Vitamin D?

The SPRITES of East County has joined the Helen Knoll Foundation and the GrassrootsHealth D*action project to “Stop Breast...

Benefits may be most pronounced for Black women and patients diagnosed with later-stage disease Song Yao, PhD, led research...

Interactive PDF: How Vitamin D Deficiency Affects Every Part of the Body

What is Vitamin D Good For? Vitamin D is needed by virtually every cell in the body, and is...

Can Vitamin D Prevent Breast Cancer? What is your D level? What’s the Evidence? There have been many studies...