Low levels of vitamin D have been consistently linked to an increased risk of inflammatory diseases, such as cardiovascular disease, arthritis, multiple sclerosis (MS), and sepsis. Also common among inflammatory based diseases is the disruption in the tightness and stability of endothelial and vascular tissues. (Endothelial cells form the inner lining of the heart and blood vessels (veins, arteries, capillaries) and the lymphatic system.) This disruption contributes to dysfunctional nutrient exchange, inflammatory cell migration, and abnormal clotting. Addressing this disruption has been shown to lessen the effects from the inflammatory diseases involved. 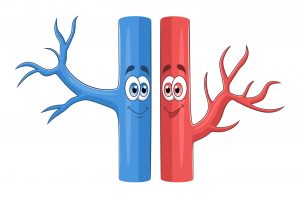 A study by Gibson et al. looked at a genetic inflammatory disease called cerebral cavernous malformation (CCM) to identify potential suppressors of the disease and resulting destabilization of the endothelial membranes. They found vitamin D3, the pre-converted form that our bodies get from food, supplements and sun, to have such effects both in vitro and in vivo. In a subsequent study, the researchers investigated whether vitamin D3 and its metabolites could provide general endothelial stability outside of the genetic disease model.

While it has been shown that some vitamin D3 is absorbed directly into and utilized within the cells themselves, the majority of vitamin D3 goes to the liver for its first conversion process, 25-hydroxylation. This process converts vitamin D3 into 25-hydroxyvitamin D (or 25(OH)D), which is the form of vitamin D that is measured in the blood as an indication of an individual’s overall vitamin D status. Conversion of 25(OH)D into what is commonly known as the “active” form of vitamin D, 1,25(OH)2D (or 1,25D), is done mostly in the kidneys as part of vitamin D’s function within the endocrine system. Learn more about what happens to the vitamin D we take or make within the body here. Most of the attention in research has been on these two metabolites of vitamin D, 25(OH)D and 1,25(OH)2D.

Could There be More to Native Vitamin D3 Than Previously Thought?

In previous posts, we have discussed the newly appreciated observation that vitamin D3 is delivered directly to all tissues of the body. Many of these tissues, such as breast, colon, prostate, and brain, can convert vitamin D to its active form within the tissue. It is through this process that vitamin D can help enable the cells to fight against infections, disease, and autoimmune disorders.

Gibson et al. discovered that, not only is vitamin D3 itself needed and taken in by the cells, it is also actively used by the cells as a “potent and general mediator of endothelial stability at physiologically relevant levels.” They found that each form of vitamin D (vitamin D3, 25(OH)D and 1,25(OH)2D) increased stability within minutes, inhibiting permeability of the endothelial and vascular lining, and reversing inflammation, all of which resulted in reduced leakage into surrounding tissues. Of particular note in the results was that vitamin D3, which was previously thought to be inactive, had the most potent effect – more than 10 times more potent than 1,25(OH)2D and more than 1,000 times more potent than 25(OH)D. They also discovered that vitamin D3 directly inhibited the destabilizing effects of multiple pro-inflammatory signals, such as interleukin-1b, tumor necrosis factor-a, and bacterial lipopolysaccharides. 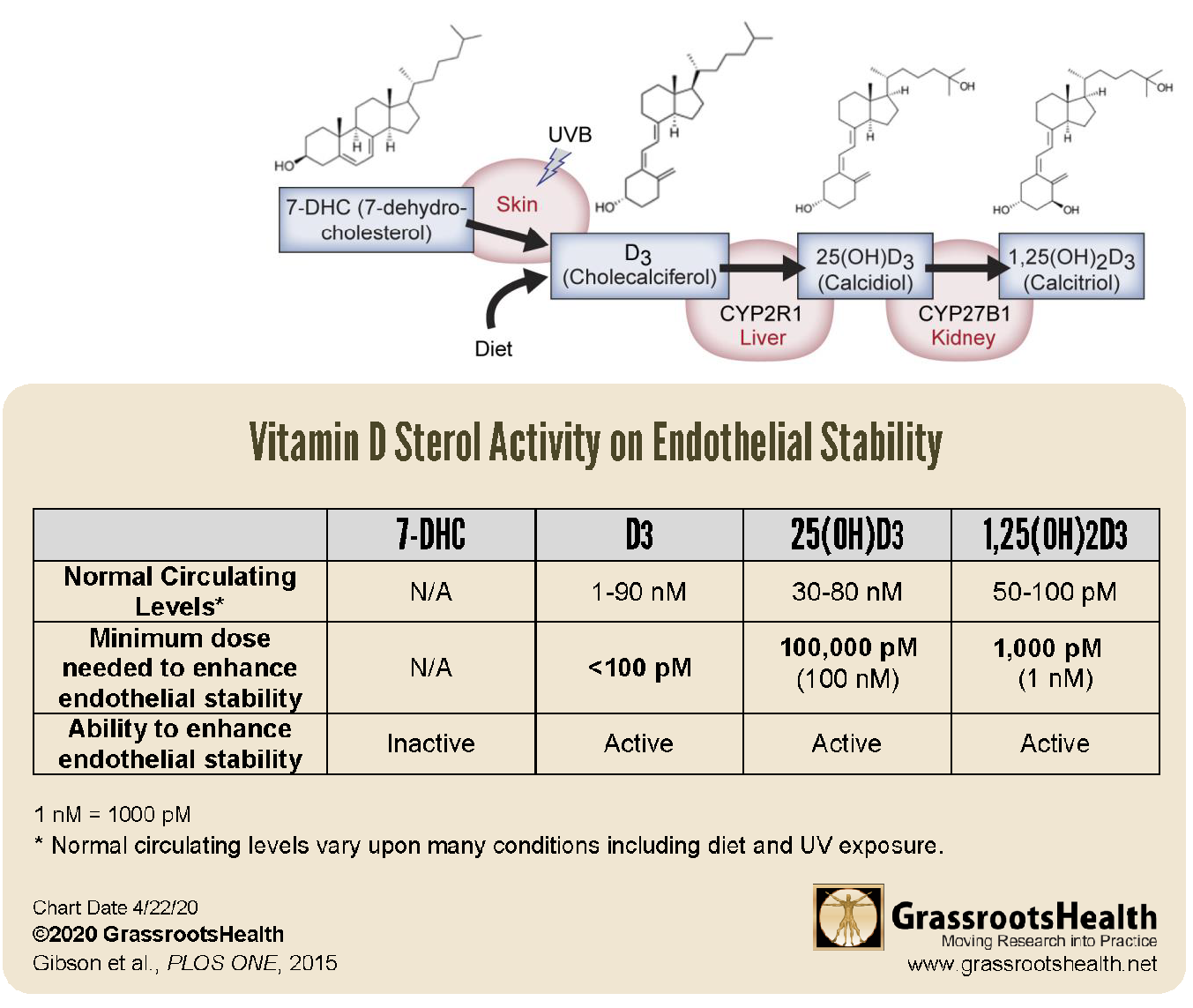 Overall, the data from this study shows that vitamin D sterols, especially vitamin D3 itself, acts directly to suppress and prevent destabilization of the endothelial membranes and its negative effects. This direct action of vitamin D3, along with the knowledge that the half-life of vitamin D3 in the body is roughly 24 hours, is further evidence in support of daily dosing and/or UVB exposure.

GrassrootsHealth is prepared to move forward by using science to drive global action, with using either clinical trials with our key researchers or by doing community Field Trials with individuals or other organizations. Please let us know if you are interested and how we can quickly setup your projects.

Could You or Someone You Know Need More Vitamin D?

Do you know what your vitamin D level is? Be sure to test today to find out, and take steps to keep it within a target of 40-60 ng/ml or 100-150 nmol/L! Give your immune system the nutrients it needs to support a healthy you and protect yourself from unnecessary diseases. Through GrassrootsHealth Nutrient Research Institute, you can also test your essential elements magnesium, copper, zinc and selenium, toxins such as lead, mercury and cadmium, as well as your omega-3 levels, inflammation levels and thyroid stimulating hormone (TSH) level. Find out your levels today! Log on to the test selection page (click the link below) to get your tests and see for yourself if your levels can be improved.  Make sure you track your results before and after, about every 6 months! 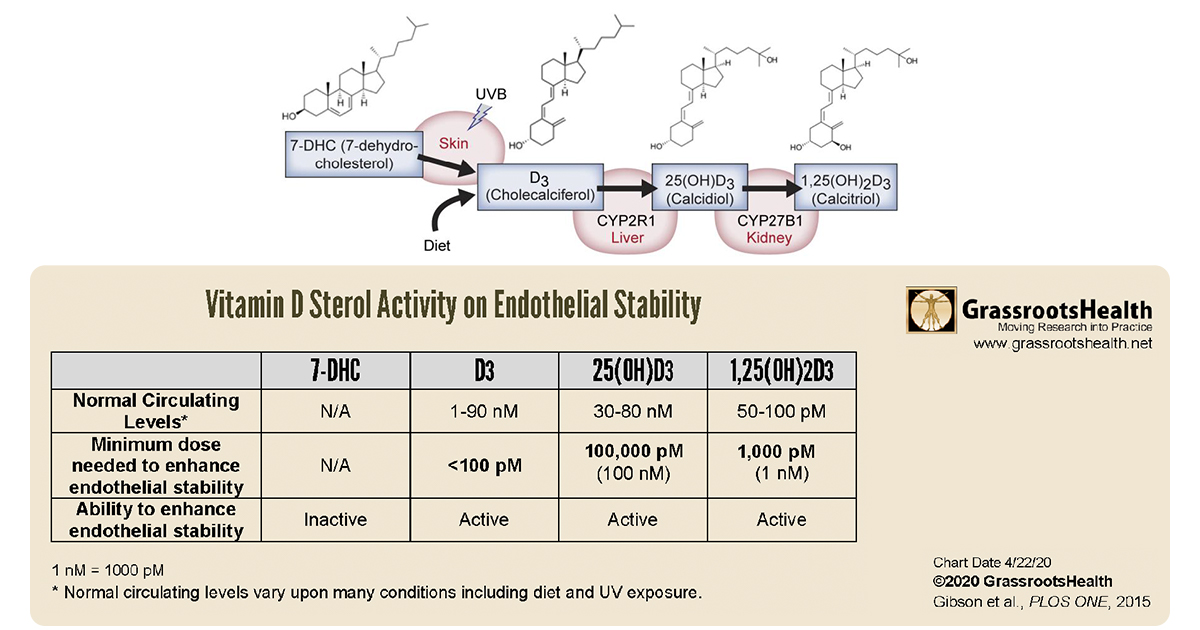