A study recently published by Srinivasan et al. looked at 25(OH)D serum levels of 80 preterm infants (gestation less than 34 weeks). Objectives of the study were to determine the vitamin D levels in the cord blood of these infants, randomly assign each infant to either 400 IU daily or 800-1000 IU daily supplementation, and then to correlate the serum vitamin D levels to neonatal morbidity and outcome of sepsis, retinopathy of prematurity (ROP), and delayed retinal maturation.

Within this group of premature infants:

The paper concludes that the American Academy of Pediatrics’ guidelines for supplementation in infants of 400 IU is insufficient, and most infants require 800 – 1000 IU vitamin D soon after birth to maintain physiological vitamin D levels of ≥ 30 ng/ml, especially if they are exclusively breast fed. 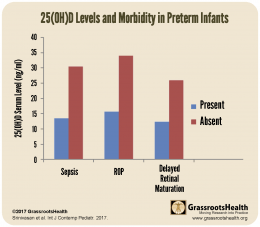