One of the misconceptions about vitamin D is that increased vitamin D levels can increase the risk for kidney stones. Upon examination of the D*action population, GrassrootsHealth was able to show an opposite effect.

Of 2012 D*action participants who had submitted at least two health questionnaires and vitamin D blood tests, 13 reported an occurrence of kidney stones after their first test. Of the 13 cases, eight were below the median serum level of 50 ng/ml (125 nmol/L) and five were above. 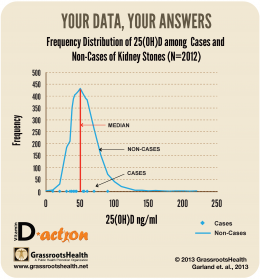