A study by Lembke et al., “Influence of Omega-3 (N3) Index on Performance and Wellbeing in Young Adults after Heavy Eccentric Exercise,” compared the Omega-3 Index of subjects with the incidence of delayed onset muscle soreness (DOMS), inflammatory biomarkers, and quality of life following vigorous exercise.  Plasma C-reactive protein (CRP) was measured as an indicator of inflammation at 0, 24-, 48-, 72-, and 96 hours post-exercise.

Delayed onset muscle soreness is characterized as a type of soreness that is usually caused by a new or unaccustomed exercise.  The onset of DOMS generally occurs within 24-48 hours following exercise, may be associated with swelling, tenderness and discomfort, and may be experienced up to 1 week following heavy exercise.

After 30 days of supplementation, Group 1 (N=42) moved from an initial average Omega-3 Index of 3.6  up to 5.4 as measured at the start of the exercise portion of the intervention.

The results of the study were as follows: What is the connection between omega-3 and inflammation?

Previous research has suggested that omega-3 supplementation may be protective against inflammatory conditions that have been linked with many chronic diseases, such as metabolic syndrome and Type 1 Diabetes.

Specific to exercise, the findings of this study “support the hypothesis that higher omega-3 tissue levels may have a protective effect on muscle cells during exercise and may act by reducing the inflammatory response and subsequent DOMS.” 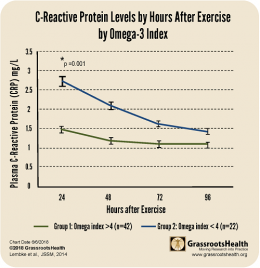