In April 2016 GrassrootsHealth published a paper on vitamin D levels and all non-skin cancers. This paper used data from two different groups – one from a randomized controlled trial (RCT) and one from a subset of our D*action and Breast Cancer Prevention projects. A summary of this paper is here.

This combined data set, with 2,304 women aged over 55 years and older, was relatively balanced between the two groups – 1,135 from D*action and 1,169 from the RCT. The median vitamin D levels, however, were not similar. The D*action group had a median level of 48 ng/ml (within our recommended range!) and the RCT group had a median of 30 ng/ml (which is higher than the US average of 25 ng/ml). Data from Tretli et al. followed 210 lung cancer patients for up to 18 years. Survival length was mapped with respect to vitamin D levels. Those with the highest vitamin D levels had the longest survival rates and the difference between the highest and lowest groups was dramatic. 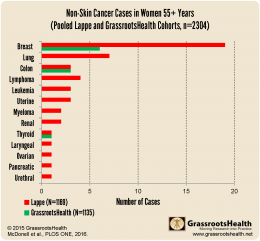