What has GrassrootsHealth found from our D*action study?

In an earlier version of the GrassrootsHealth D*action questionnaire, 2009-2011, there was a section on diet. We used data from this section for 780 non-supplement taking participants, aged 16 years or older, to analyze food sources of vitamin D. This group had a mean serum 25(OH)D of 33 ng/ml, a mean age of 48 years, and 65% were female.

Neither fish nor milk – both considered traditional food sources of vitamin D – was positively associated with vitamin D serum level in this cohort. Other foods that did not seem to make a difference were butter, fruits, vegetables, olive oil, mayonnaise, cream cheese, or sour cream.

Since milk is fortified, shouldn’t it have an impact on vitamin D levels? Yes, it should, but we may not have had enough milk drinkers in our group to show that impact. The milk consumption of the D*action cohort was very low, with an average of only 2 servings per week.

More on milk – benefit in greater than one serving/day

Susan Whiting, who was interviewed October 2015, co-authored an analysis of milk consumption and vitamin D status of Canadians which found that frequency of milk consumption did indeed have a positive effect on 25(OH)D concentrations. Those who consumed milk more than once a day had a mean 25(OH)D concentration of 30 ng/ml whereas those who consumed it less than once a day had a mean concentration of 25 ng/ml (view paper for detail). The analysis also found that the percentage of people who consume milk more than once a day is highest in children ages 6 – 11 years (the youngest age group of the study), at about 65%, and declines with age to just over 20% in seniors aged 60 to 79 years.

Does food provide most of the basal vitamin D input in the US?

A paper by Robert Heaney et al., All-Source Basal Vitamin D Inputs Are Greater Than Previously Thought and Cutaneous Inputs Are Smaller, analyzed 8 studies with a total sample size of 3,000 individuals. The purpose was to try to determine the various sources of vitamin D input for non-supplement users. The findings included:

This blog is a profile of a D*action participant who has shown that it is possible to get enough vitamin D to maintain good health from food alone, but you will see that she does not have a typical western diet. 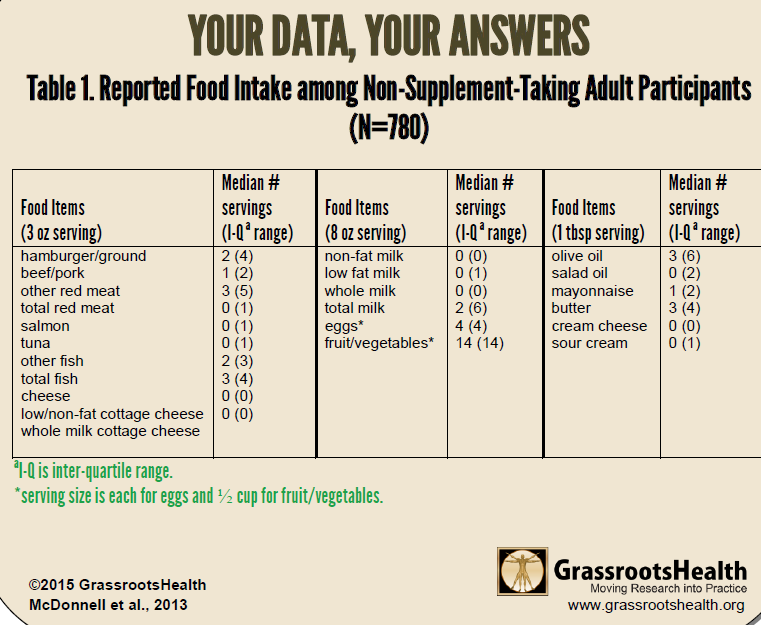