Researchers have known since 2007 that vitamin D may be the single most important nutrient in the prevention and elimination of breast cancer. Since 2007, more research has corroborated this conclusion.

When will we act?

Take a stand today. Start with yourself. Move into your community. Review the research and help elicit real change. We don’t need another walk, nor another cancer drug.

What was the study?

It was a four-year, population-based, double-blind, randomized, placebo-controlled trial (RCT). The “primary outcome,” or main goal of the trial, was to see if the vitamin D and calcium reduced fractures in an older population. The “secondary outcome,” meaning something they would monitor but the trial was not specifically designed for, was cancer incidence.

They enrolled 1,179 healthy, postmenopausal women, aged 55 or older, from communities in a 9-county area of rural Nebraska (near Creighton University). The population was predominantly white, lived around 41 degrees latitude, and had an average vitamin D level of 29 ng/ml (72 nmol/L) which is higher than the US population average at the time of 24 ng/ml (60 nmol/L).

The trial was designed and results were analyzed based on the industry standard of comparing dosage amounts. There were 50 incidences of cancer over the four-year trial and the women in the vitamin D and calcium group were 60% less likely to get cancer compared to the control group. This is a substantial reduction, but it is important for researchers to take different looks at the data, as this sometimes supplies different outcomes.

They analyzed the data without year one results reasoning that if someone was diagnosed with cancer during the first year of the study, they probably had the beginnings of cancer going into the trial, and supplementation would not greatly affect their cancer status.

Studying the data from years 2-4 they found the vitamin D and calcium group had a 77% reduced risk of breast cancer compared to the full placebo group. GrassrootsHealth advocates testing vitamin D levels, not a blanket dosage recommendation, because individuals vary greatly (up to six times different!) in their absorption of vitamin D. For this same reason, GrassrootsHealth is trying to change the way the scientific community reviews RCT data on vitamin D. The most important change is to design trials with each group achieving a different target serum level and comparing these serum level groups rather than dosage groups.

This was not known when this trial was started in 2000, but Lappe provided us with access to the study data to conduct an observational analysis by serum level. Are these results alarming?

The fact that vitamin D has such an effect on cancer might be alarming to some, but when you look at vitamin D level, not dosage, many studies show these same results. A graph like the one below where disease incidence is higher at low vitamin D levels, the left of the curve, and lower as vitamin D level increases, up to a point where there is almost no change. It is these types of charts that move vitamin D scientists to recommend testing and maintaining a level in the range of 40-60 ng/ml. One of the reasons you may not have heard the results of this study is that the media ignored it. The few outlets that picked it up (abcnews, webmd) also asked the American Cancer Society (ACS) their opinion and ACS was very cautious. Most of the caution was around vitamin D, because how can we really prove a nutrient could prevent disease (even though vitamin D eradicated rickets in the early 1900s)?

The scientific reason this study was largely ignored was that cancer was not the “primary outcome”. Lappe was told she needed to replicate this study with more women and with cancer being the primary outcome. She did this, and results were reported in 2017, ten years after the original report, because that is how long it takes to define, fund, conduct, and report on an RCT. Again, the results were favorable, but when results were reported by dosage they were not as strong as those by vitamin D level. Vitamin D level results were in the supplement of the paper but were not allowed by the journal to be in the main body. They were ignored. You can read more about this 2017 study here.

In the 2017 study, by serum level, there was a 35% reduction between 30-55 ng/ml (75-140nmol/L) which was statistically significant.  If you look at the chart below you can see the slope of the red line is similar to the line above. After the study – what was done?

Since the initial paper was published in 2007, a number of researchers have studied vitamin D and cancer and you can see a list of some of those studies and their findings here.

In 2007 GrassrootsHealth was founded, it was determined that the best way to ensure you are getting “enough” vitamin D is for you to take a blood test and that most disease is prevented with a blood level in the range of 40-60 ng/ml, but breast cancer is best deterred with levels over 60 ng/ml. The key is to test because people react differently to the same amount of vitamin D. 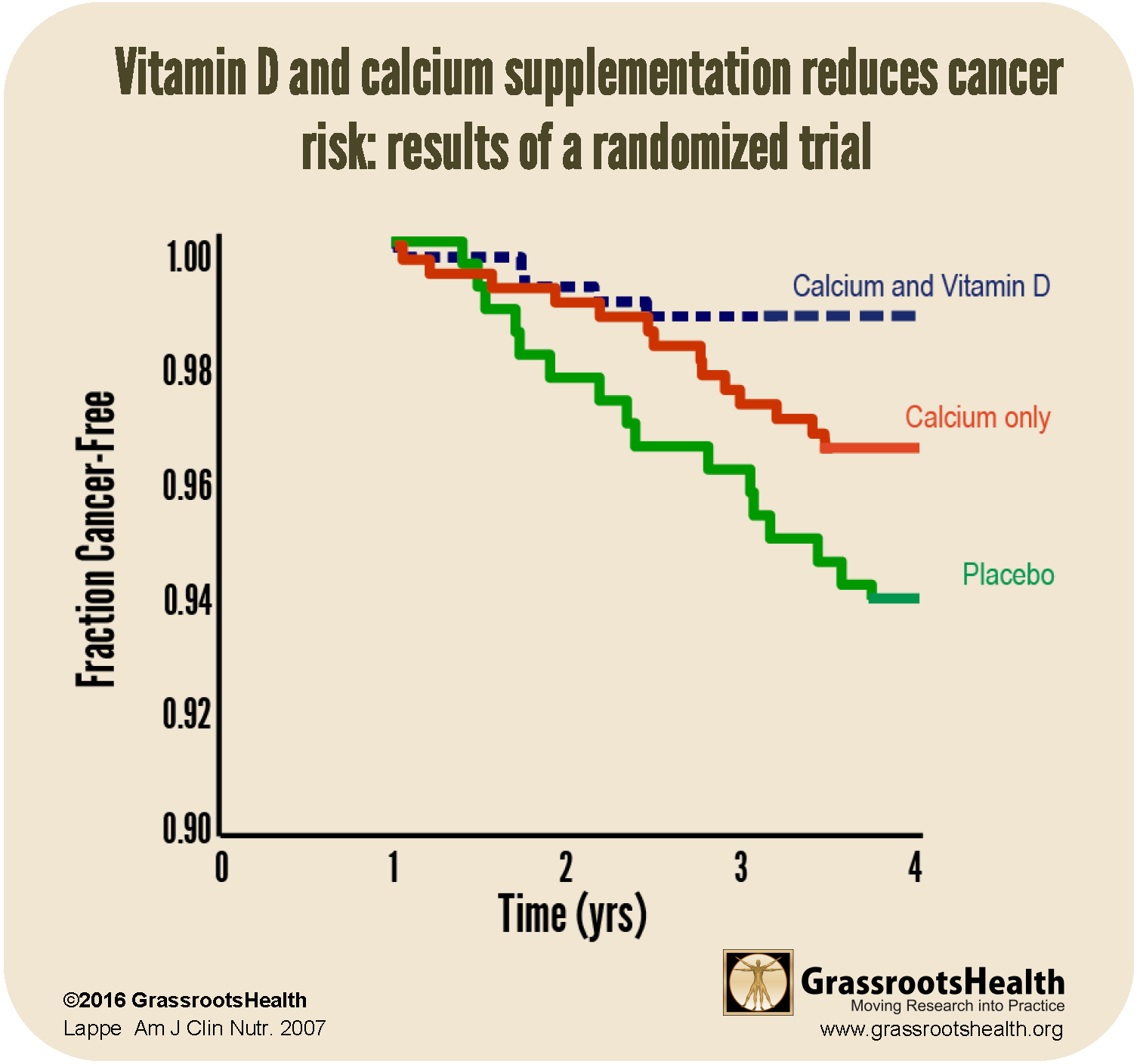