It is well-known that most breastfeeding babies are not getting adequate vitamin D and if a mother were to bring this topic up during a baby’s well-visit, the pediatrician would most likely recommend a 400 IU/day infant drop. This is fine and will work for the baby, but NHANES data has found that only 2-19% of all babies are actually getting the prescribed daily amount of vitamin D. That leaves over 80% not getting the recommended amount of vitamin D.

Is there another way? If breastfeeding is nature’s method for feeding babies, was it always flawed? Probably not, research on ancestral levels of vitamin D shows that pregnant mothers in ancestral tribes of East Africa have higher vitamin D levels during pregnancy.

But, we are not outdoors hunting and gathering daily – so how can nursing mothers in the modern world take care of BOTH themselves and their baby? Is there an ideal amount of supplement a nursing mother could take that would be helpful not only for herself but also provide an amount sufficient for the baby?

Please read on to fully understand the results, but the conclusion was 6,400 IU vitamin D /day gave mothers an average vitamin D level of 60 ng/ml (150 nmol/L) and gave babies the equivalent of 400 IU vitamin D/day – and an average vitamin D level of 40 ng/ml (100 nmol/L). This worked for the study as a whole, but there is a six-fold variability in how people respond to supplementation, so it is always better to test, not guess, and maintain the right vitamin D blood level – not just take a set amount of supplement. (Learn the health benefits to both mother and baby with vitamin d sufficiency.)

This randomized controlled trial (RCT) divided the breastfeeding women/infant pairs, at 4-6 weeks post-partum, into one of three groups:

Previous research found that if the breastfeeding mother was only taking the recommended daily allowance of 400 IU per day, then an infant, solely fed on breast milk, would get the equivalent of 33 – 68 IU vitamin D / liter, which would provide the infant with far less than the recommended 400 IU/day. Hollis was a co-author in a study (2006) that reported infants breastfed by mothers taking only 400 IU/day typically had vitamin D levels < 5 ng/ml (< 12.5 nmol/L).

Even though the American Academy of Pediatrics recommends supplementing infants with vitamin D right after birth, studies show a compliance of between 2 – 19%. Hollis calls infant supplementation “a largely failed initiative.” 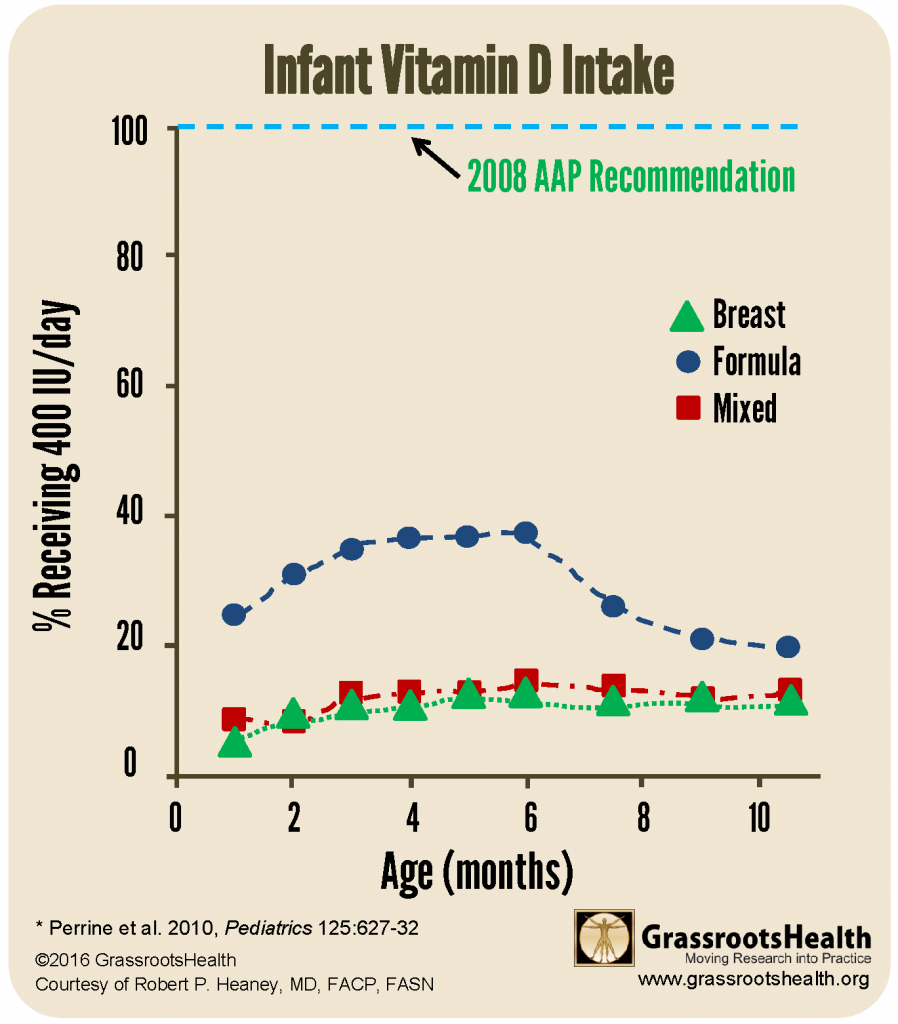 How do we get these babies the vitamin D they need?

This RCT concluded that giving breastfeeding mothers 6,400 IU vitamin D /day, and no additional supplement for the infant, made sure the mother became sufficient (with an average vitamin D level of around 60 ng/ml) AND infants became sufficient (with an average vitamin D level a little above 40 ng/ml). The infants in this group had equivalent vitamin D status to those who received 400 IU/day (and the mother also received 400 IU/day). Many other measurements and blood tests were taken, including weight, length and head circumference of the infant, which were similar for both groups. 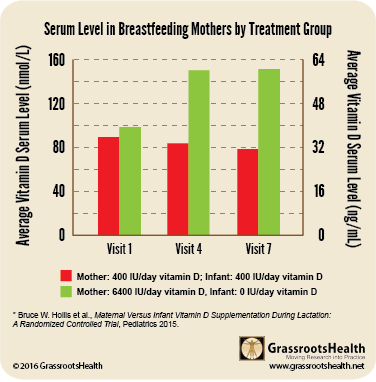 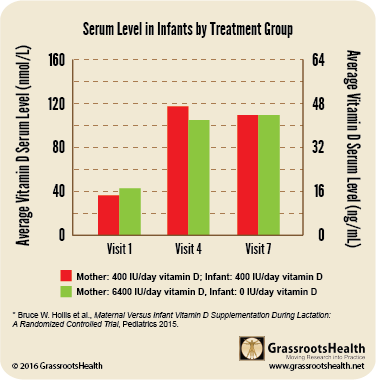 WHAT THIS STUDY FOUND: Maternal vitamin D supplementation alone with 6400 IU/day safely supplies breast milk with adequate vitamin D to satisfy the requirement of her nursing infant and offers an alternate strategy to direct infant supplementation

Daily intake is most important

One of the most important takeaway messages from this research is that breast milk can be an adequate source of vitamin D for the infant if the mother takes enough of a supplement daily! (Adequate daily sun exposure would also have the same result, but that was not part of this research study.)

In earlier research, Hollis analyzed how vitamin D is transferred from the mother to the baby and found that it is transferred primarily in its parent form as vitamin D3 rather than 25(OH)D, the compound that is most commonly measured in blood. Vitamin D3 has a half-life of approximately 12 – 24 hours, and thus has to be replenished daily; 25(OH)D has a half-life of approximately 3 weeks, so while intermittent dosing can maintain high levels of 25(OH)D, it will not be adequate for transferring the daily requirement of vitamin D3 to the breastmilk.

Hollis recommends the standard of care for breastfeeding mothers to be 6,400 IU vitamin D / day. This is safe and effective and ensures both mother and baby will become vitamin D sufficient. 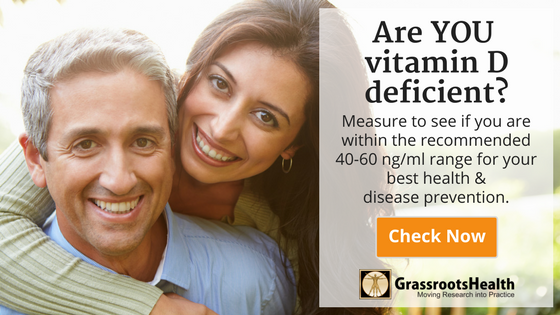 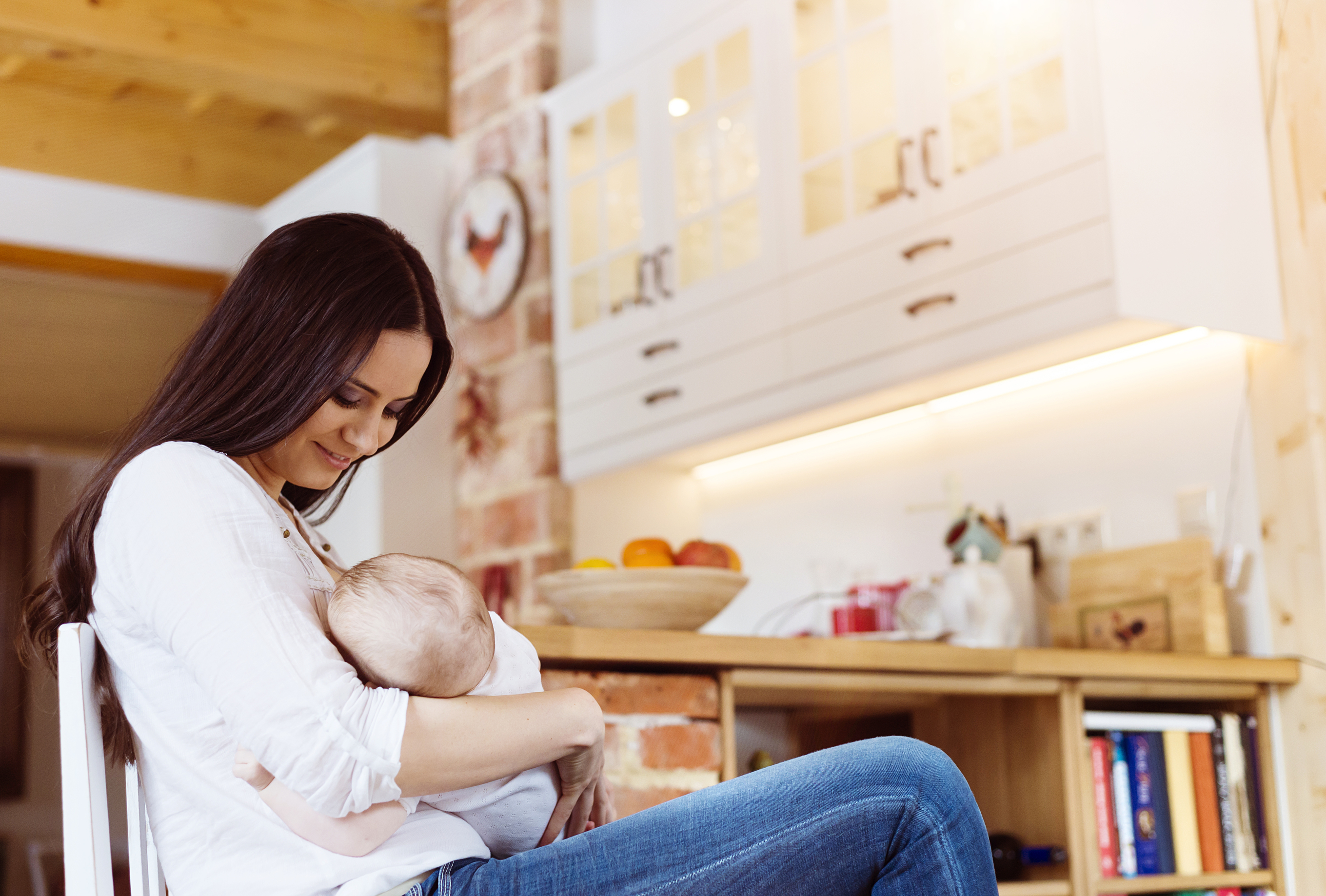