Some of the most compelling evidence of the need for a minimum vitamin D level of 40 ng/ml (100 nmol/L)… How fulfilling the unique need for vitamin D during pregnancy can impact prenatal, newborn & lifelong health 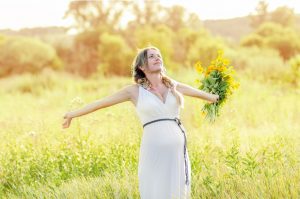 Did you know? By week 12, a pregnant woman’s body converts more vitamin D than ‘normal,’ so that the level of the hormonal form of vitamin D [1,25(OH)2D] would be considered toxic and potentially fatal to a non-pregnant person. And, this conversion is optimized when she has enough vitamin D3 to sustain a serum 25(OH)D of 40 ng/ml (100 nmol/L)…

There are many physiological processes that occur during pregnancy and at no other time in the life cycle. One of these processes is a specific rate of vitamin D conversion that is allowed to optimize only in situations where there is enough vitamin D3 available. While vitamin D is necessary for all stages of the life-cycle, numerous studies have found that higher vitamin D levels during (and even before) pregnancy reduce the risk of adverse maternal and infant outcomes, and can even have a life-long effect on the baby.

During pregnancy, conversion of 25(OH)D to the hormonal form, 1,25(OH)2D, increases so that by 12 weeks, levels in the blood are triple that of normal, non-pregnant female and normal male subjects. In a non-pregnant person, these levels would alter calcium concentrations in the blood and result in toxicity and potential death, but these are perfectly normal levels during pregnancy. Furthermore, the rise in 1,25(OH)2D is independent of the calcium system, nor is it controlled by parathyroid hormone, which is the only time in the lifecycle that this un-coupling occurs. Further observation has revealed that the direct influence of 25(OH)D (up to ~40 ng/ml) on 1,25(OH)2D levels is also unique to pregnant women. 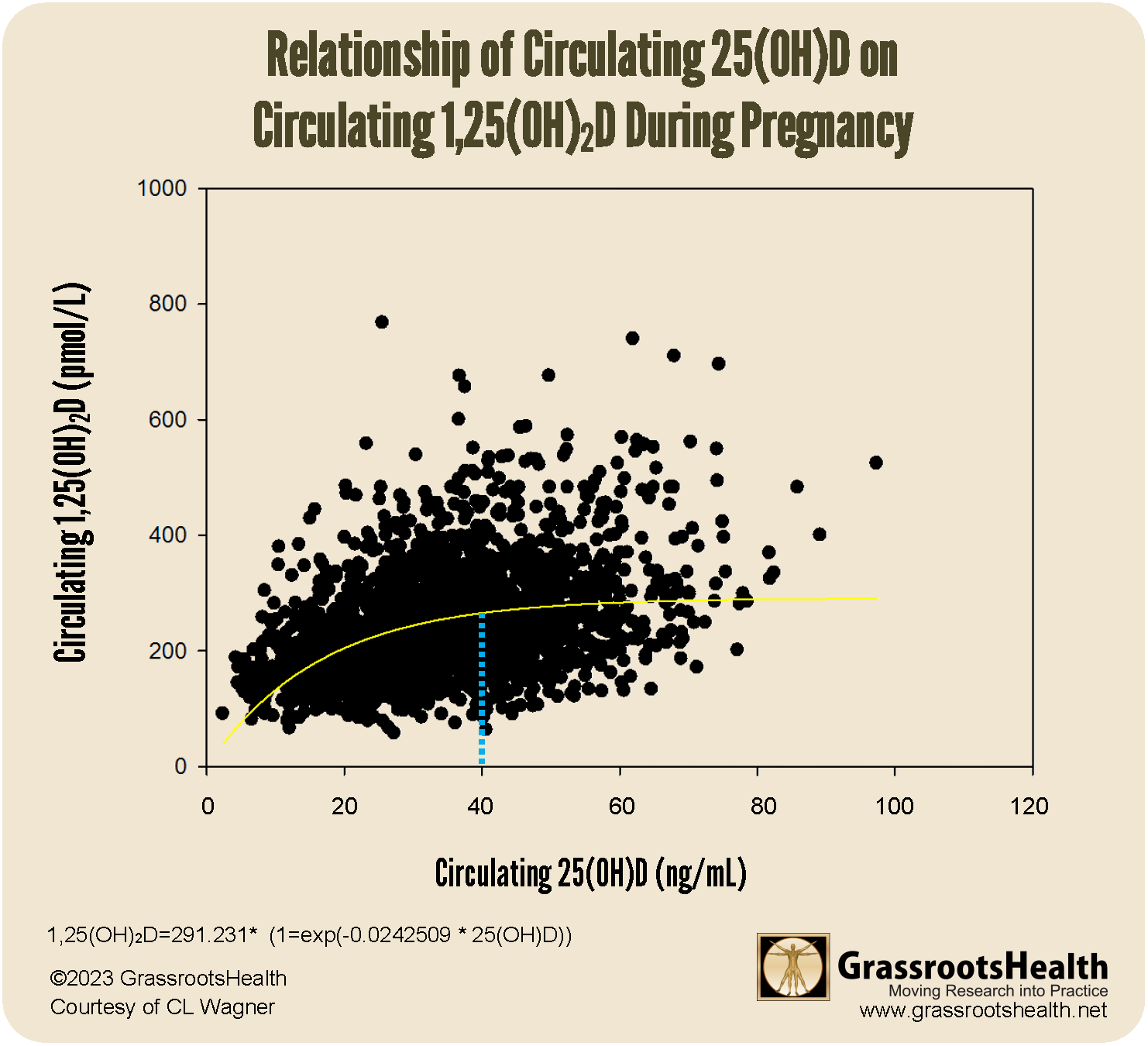 What Happens When Vitamin D3 is Plentiful in Pregnancy?

A study by Luxwolda et al. perfectly illustrates what vitamin D levels naturally occur in pregnant women, compared to the rest of the population, when there is plentiful vitamin D3. The study investigated the vitamin D status across the life cycle in various East African populations to determine what serum 25(OH)D level represents sufficient status among populations whose lifestyle closely matches that of our ancestors; notice the average serum 25(OH)D level of this population as a whole is at least 40 ng/ml. The chart below illustrates the levels Luxwolda found in these African tribes, which are much higher than what is currently accepted by the National Academy of Sciences (previously the IOM) and most medical institutions (and are very close to GrassrootsHealth’s recommended 40-60 ng/ml). Further, 25(OH)D levels in pregnancy (shown in yellow) are far higher than in non-pregnant individuals, indicating the higher vitamin D need for the mother during pregnancy. 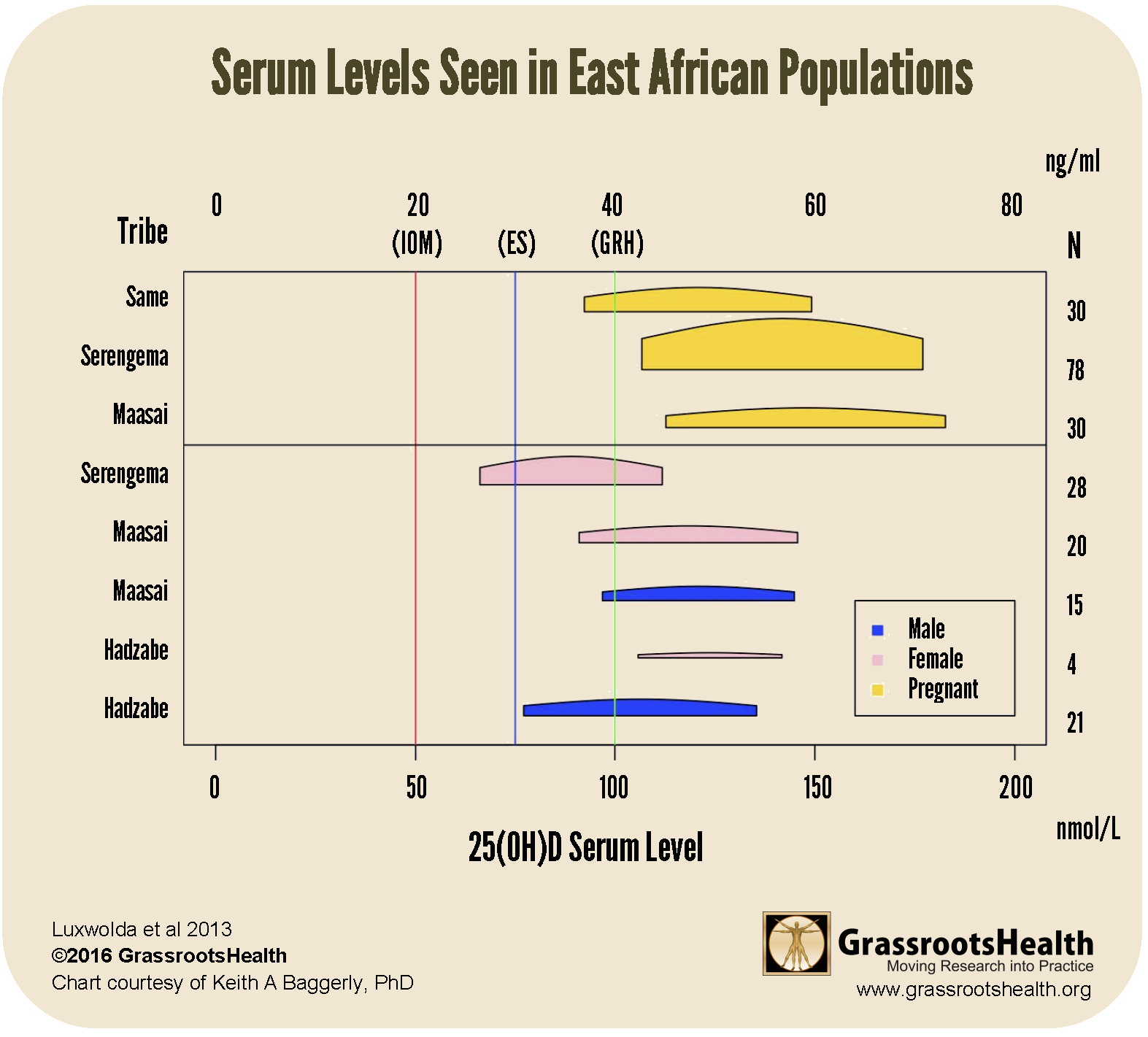 What Happens when Vitamin D3 is Lacking? (What is Meant to Happen CAN’T Without Enough Vitamin D)

The chart from this study, seen below, illustrates that the rise in 25(OH) vitamin D concentrations, especially during the third trimester of pregnancy, peaked in the summer months, when vitamin D3 from sunshine was more plentiful. Also, the rise was more pronounced in T3 than T1, indicating increased conversion and a greater need for vitamin D towards the end of pregnancy. 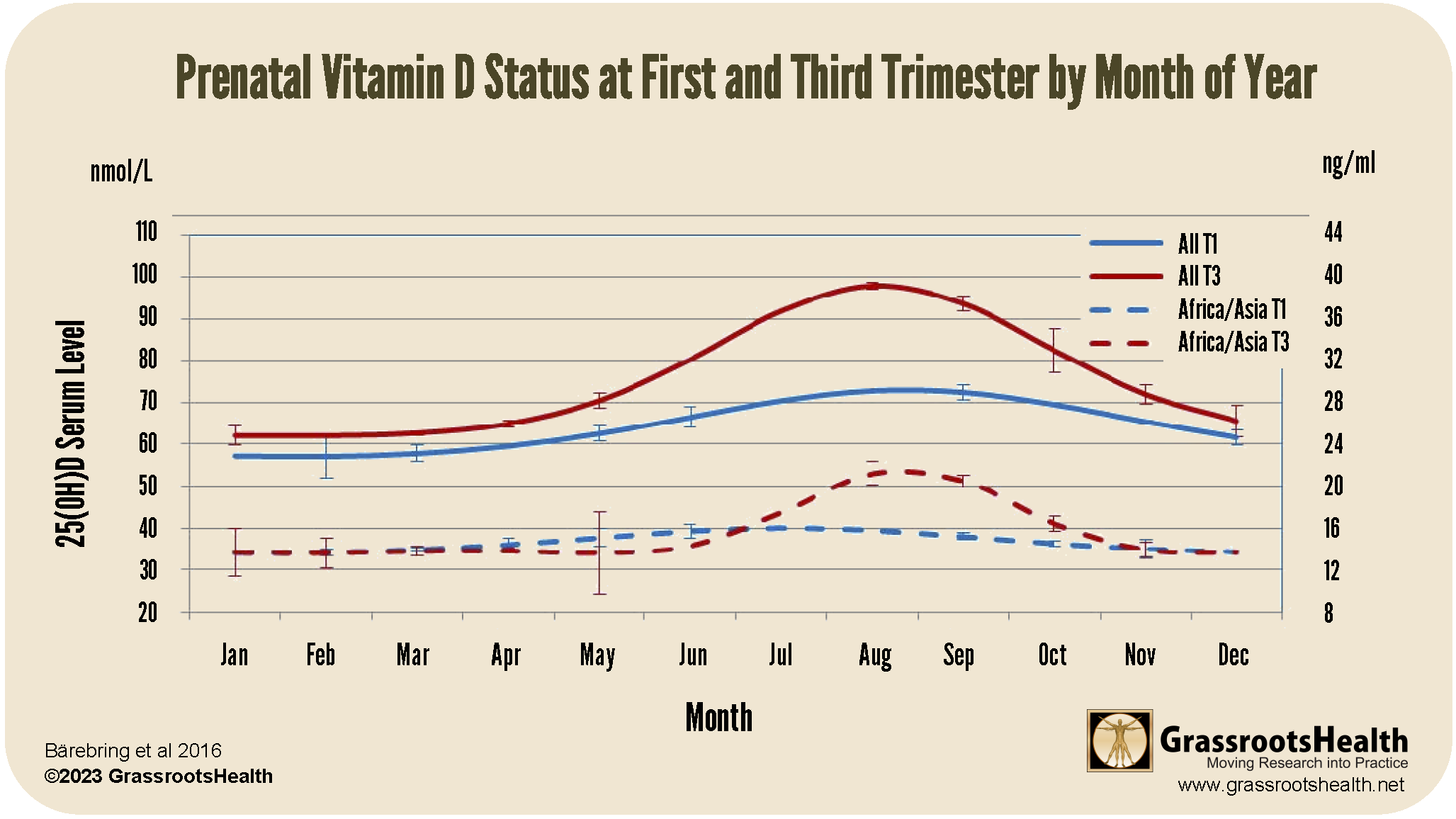 This chart clearly shows how 25(OH)D was limited during the non-summer months, especially in the third trimester, when vitamin D3 was less available to the women.

These differences raise the question — if the women in this study had more availability to vitamin D3 throughout the seasons of their pregnancy (such as through supplementation), especially in the third trimester, would seasonal variability in vitamin D levels have been as great, or would all pregnant woman have experienced peak T3 serum levels?

Another important finding from this study was that the resulting 25(OH) vitamin D levels confirmed the high prevalence of deficiency among pregnant women; 10% of all, 51% of women born in Africa, and 46% of women born in Asia were severely deficient (<12 ng/ml or <30 nmol/L). How are these low levels of vitamin D affecting their resulting 1,25(OH)2D levels, which we previously showed is meant to increase substantially in pregnancy? How is this lack of prenatal vitamin D3 affecting the health of the pregnancy and baby? 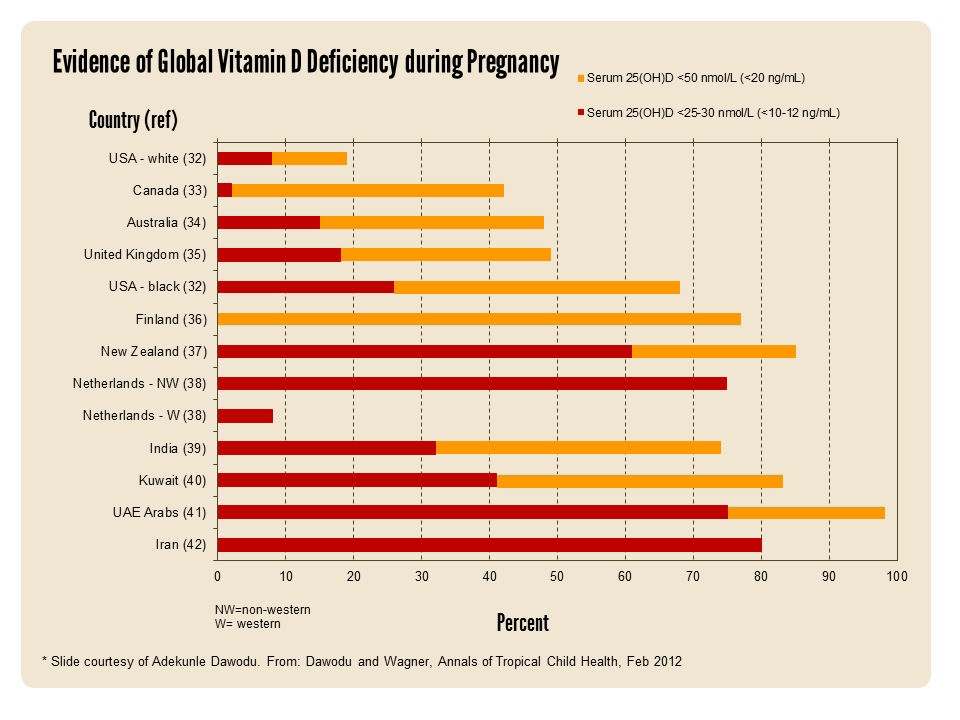 How Did We Get Here? A Major Problem with a Simple Solution

In an editorial titled “Substantial Vitamin D Supplementation Is Required during the Prenatal Period to Improve Birth Outcomes,” Hollis and Wagner state

48 international vitamin D scientists and researchers have agreed on the importance of having a vitamin D serum level between 40-60 ng/ml (100-150 nmol/L) to prevent disease and promote health, as issued in our Scientists’ Call to D*action. This recommendation is higher than that of the National Academy of Sciences (previously the Institute of Medicine), who defines vitamin D deficiency as a serum level of less than 20 ng/ml (50 nmol/L). Even based on this lower recommendation, vitamin D deficiency remains a global epidemic – one that especially affects pregnant women and their unborn children – to be discussed further in an upcoming post.

Measuring our levels of vitamin D and other important nutrients and health markers can be considered one way to check-in with our health status and guide us towards the steps to take next in improving and supporting our health.

Having and maintaining healthy vitamin D levels and other nutrient levels can help improve your health now and for your future. Choose which to measure, such as your vitamin D, omega-3s, and essential minerals including magnesium and zinc, by creating your custom home test kit today. Take steps to improve the status of each of these measurements to benefit your overall health. You can also track your own intakes, symptoms and results to see what works best for YOU.

Omega-3 Testing Urged for All Pregnant Women in Australia

Why are African Americans at Greater Risk for Some Health Problems? 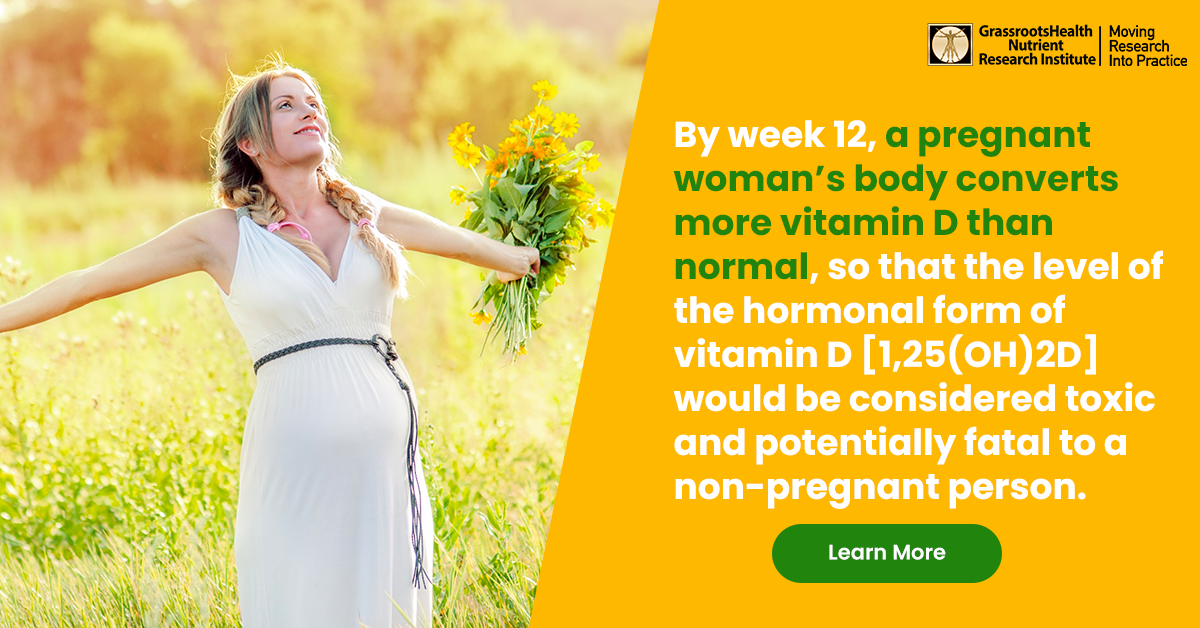