GrassrootsHealth scientists and staff have authored and published a paper, citing the D*action data, calling for the Institute of Medicine (IOM) to increase its current vitamin D recommended dietary allowance (RDA) from 600 IU/day to 7,000 IU/day from all sources.

This paper supports a paper from Paul J. Veugelers, Ph.D., which showed through statistical analysis, using the same data the IOM chose to use to compute the RDA, that the IOM made an error in their analysis and that the RDA should be 8,895 IU/day.  (The IOM’s goal was to come up with an RDA that allows 97.5% of the people to get their serum level to 20 ng/ml (50 nmol/L), a level that they claimed would maintain adequate bone health.)

Both Veugelers, using the IOM data set, and Dr. Robert Heaney, using a separate data set from D*action, have determined that the RDA is wrong by an order of magnitude. Using data and standard methods of analysis, they both showed we need 10 times more than the current recommendation.

This was the analysis done by Veugelers and Ekwaru, using the same data set chosen by the IOM committee. They read the report and had access to all the same data. What they found out is that the IOM committee made a mistake – their RDA works for the average – but not truly for 97.5% of the population.

Before we explain, let’s review some statistical math. In a sample group of numbers {10, 8, 5, 4, 3} there is an average (6), a standard deviation (2.6), and other statistical measurements that we won’t use today. So, for our data set the average was 6, but not all the numbers were truly around 6, thus you have a pretty big standard deviation (2.6). This is not the same as this data set {7,6,5,6,7,5}, which also has an average of 6, but a smaller standard deviation of 0.7. Unfortunately, the data set the IOM used was most likely more like the former (varied and spread out) than the latter (very close to the average) –  because of the math we are about to expose and also because we know, from D*action data, that there is a 6-fold variability in response to supplementation.

Veugelers and Ekwaru first showed the chart used by the IOM to compute the RDA as 600 IU/day (Figure 1). This chart shows the AVERAGES of the study data sets used (10 studies, but since each had multiple dosing groups, there were 32 different study populations); the fitted dose-response curve (the green solid line) which shows the best fit through the study points/averages; and the confidence interval lines (green dashed lines) which show the upper and lower bounds to where the best fit line really belongs with 95% certainty. the lower 95% confidence interval also corresponds to the 2.5 percentile, or where 97.5% of the population should be above. From this data, the IOM estimated that 600 IU/day would get the average person(where it crosses the solid line) to a serum level of 63 nmol/L, and would get 97.5% of the population (where it crosses the lower dashed line) to 56 nmol/L. To account for some uncertainty in the data, they rounded down to estimate that 600 IU/day should get 97.5% of the population to 50 nmol/L, their goal for the RDA.

What Veuglers and Ekwaru did with this same data, was to create a point for each data set that 97.5% of the population was at or above, rather than use the average. Since this data wasn’t in the study reports they took the average from each of the data sets, subtracted two standard deviations – and they had their point – the serum level that 97.5% of the study participants achieved on that supplemental dosage. Veugelers and Ekwaru argue that this is the true value for the RDA. You will see that their graph is similar to the graph above, just shifted lower on the y-axis, the serum level measurement. After they plotted these values they added the lower 95% confidence band (red dashed line). You will see that supplemental doses of up to 2400 IU/day (the highest any of these studies ever used) did not even approach 50 nmol/L (20 ng/ml). With their new line, they estimated that with a supplemental intake of 600 IU/day, 97.5% of the population would achieve a serum level of at least roughly 27 nmol/L, not 50. 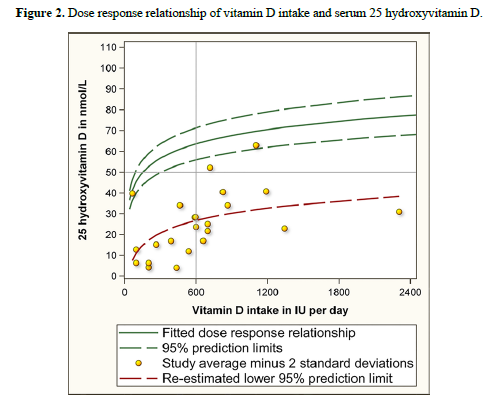 So, how did they come up with 8895 IU/day? They extrapolated the line until the point they estimated it would cross 50 nmol/L, but even in their paper, they admit that this has much uncertainty, because no participants ever took more than 2400 IU/day.

Regardless, the paper argued that the IOM was off by an order of magnitude.

GrassrootsHealth and its scientist panel also disagreed with the RDA but went about a different way to show it. Instead of re-hashing the same data set, GrassrootsHealth used the D*action data set, which at the time had 3657 individuals taking between 0 and 10,000 IU/day. This was a sample with reported health outcomes and supplement dosages within the parameters of what was being recommended.

GrassrootsHealth plotted each person’s result (their attained serum level, their reported daily supplement intake) and created the 95% confidence bands, just as the others had done. The chart below shows that 97.5% confidence (lower red line) crosses 20 ng/ml (50 nmol/L) serum level at a supplementation intake of 3,875 IU/day supplementation. But, we also get vitamin D from our food and the sun. (The studies used by the IOM were conducted in the winter months in the northern latitudes so that sun exposure would not be an additional source of vitamin D.) From the answers in the D*action questionnaires and a different GrassrootsHealth paper, we know most of our participants get 3300 IU/day from food and the sun – so the total vitamin D intake for a day would need to be roughly 7,000 IU/day. 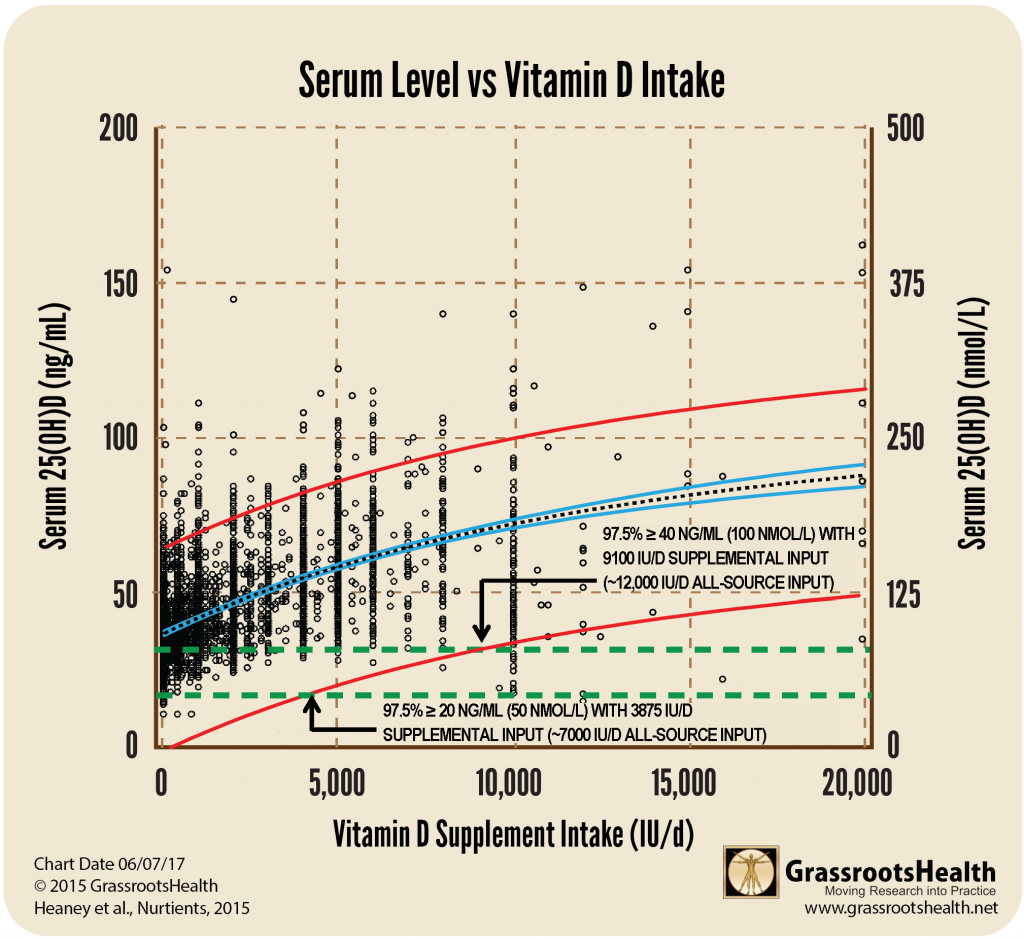 What does this mean?

But, many of us have people we are trying to teach about vitamin D. We encourage them to get their serum levels above 40 ng/ml – usually by taking 4,000 IU/day or even 10,000 IU/day. We give them all the information and have them convinced. Then they go to their doctor and learn that the RDA is 600 IU/day. They become scared and unsure of what to do. What we are recommending is too different from the establishment.

The RDA affects how doctors react to vitamin D. With the RDA set at 600 IU/day, many practitioners are hesitant to recommend that their patients take any more than 1000 – 2000 IU/day, even when they have measured the serum level and found it to be low. At that level of intake, many people will never reach a healthy level of 40-60 ng/ml (100-150 nmol/L), let alone the RDA goal of 20 ng/ml (50 nmol/L).

Keep in mind that this 7,000 IU/day is from all sources. This paper estimates 3875 IU/day in supplementation and approximately 3300 IU/day from other sources.

The numbers from both Veugelers and the RDA are also all source numbers – so we are comparing apples to apples.

Is this really enough for good health?

GrassrootsHealth, with its panel of 48 vitamin D researchers, recommends a serum level of 40-60 ng/ml in order to prevent disease. Using the same data and extrapolation as above, it would take 12,000 IU/day, all source inputs, to get 97.5% of the population to 40 ng/ml.

What was the response to these papers?

While there was no direct response from the IOM committee to the authors of either of these publications, a new document explaining how the vitamin D RDA was determined was added to their website. 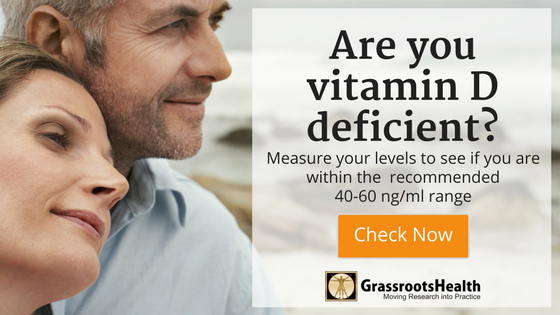 GrassrootsHealth Blog about the current US RDA

Vitamin D Supplement Doses and Serum 25-Hydroxyvitamin D in the Range Associated with Cancer Prevention
One of the conclusions of this paper is that non-supplemental, all-source vitamin D is approximately 3300 IU/day.
Cedric Garland et al.
AntiCancer Research
February 2011
Read Paper 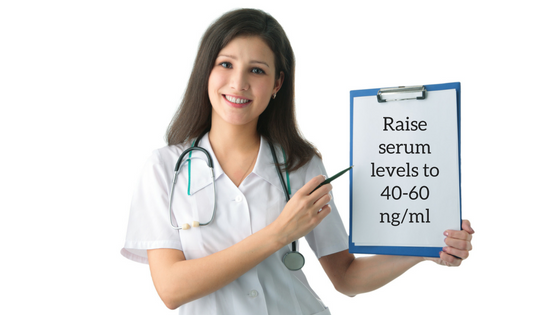