Martine Luxwolda and Remko Kuipers, two Dutch researchers, traveled to East Africa to find the vitamin D levels that most likely shaped our genome. Based on evidence that humans originated in East Africa, the research team looked to traditional lifestyles of East Africans today as the closest representation of the start human civilization – before migration from Africa 100,000 years ago, which resulted in movement North and skin depigmentation; before the agricultural revolution, 10,000 years ago; and before the industrial revolution, 100-200 years ago. They visited tribal cultures in East Africa in two separate visits, resulting in two separate papers (references below).

In their first visit, they studied 60 adults in two tribes. They obtained blood samples, which were taken back to The Netherlands for analysis. The result? That the mean 25(OH)D serum level of these tribal cultures was 115 nmol/L (46 ng/ml), much higher than the US average of 60 nmol/L (24 ng/ml) (NHANES data 2001-2010).

In this first study, they recruited 35 adults of the Massai tribe. This pastoral tribe lived a semi-nomadic lifestyle. They live in ‘bomas’, mud houses with thorn bushes encircling them. They kept cattle and spent most of the day outside working in the sun with no sunscreen. Their clothing covered their upper body and upper legs, but they did not seek the sun – they sought shade, especially during the heat of the day. Their diet consists of curdled milk and meat and some maize porridge.

They also recruited 25 adults of the Hadzabe tribe. The Hadzabe are traditional hunter-gatherers and live a nomadic lifestyle. Their day is spent searching for food (fruits and tubers gathered by women and children) and hunting animals (men). Their clothes were similar to the Massai and they also sought out shade in the mid-day sun.

The second paper was a much more in-depth study of East Africans. The research team went back and enlisted 449 adults and infants from five different tribes, including the original two. This study included a wider range of ages and also reported on 25(OH)D levels found during pregnancy and infancy. Again, the differences from our current western civilization were profound.

The overall mean for all adults was 107 nmol/L (43 ng/ml) and vitamin D level increased with age. They found that pregnant women had consistently higher levels – an average of 139 nmol/L (56 ng/ml), that cord blood was typically 65% of the mother’s level at birth, and vitamin D levels dropped quickly after birth. In addition, of all the 82 mother/infant pairs included in the study, all 82 infants were born at term (no preterm birth!). In the US, 9-12% of those babies would likely have been preterm (statistics from March of Dimes).

The three tribes that were added, Sengerema, Same, and Ukerewe, are all Bantu people. They derive income from agriculture or fishing and wear full clothing, exposing only the lower arms and face. They eat vegetables, beans, fruit, rice, and corn-wheat pancakes. The Sengereme and Ukerewe eat a diet high in fish and the Same eat a diet with moderate fish intake (Massai and Hadzabe eat no fish). With this study, because of the high fish intake, they also measured DHA in the blood. A correlation of DHA to vitamin D levels was seen, but the final conclusion was that vitamin D levels came predominantly from the sun – not from the diet.

Here is a chart from the paper that shows how vitamin D levels increase with age. Again, this is vastly different from our culture today. 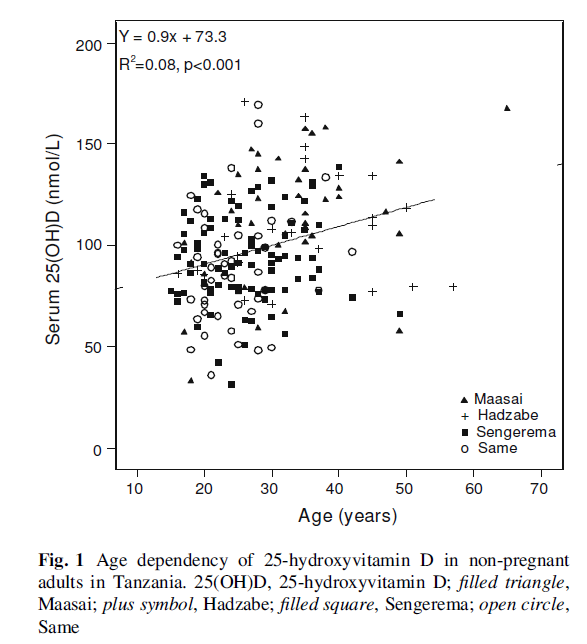 Here is a plot of vitamin D levels found in this second paper. Again, very different from our culture today, in which most pregnant women are deficient. (GrassrootsHealth promotes evidence showing benefits of pregnant women reaching a 25(OH)D level of at least 100 nmol/L (40 ng/ml) as soon as possible during pregnancy). 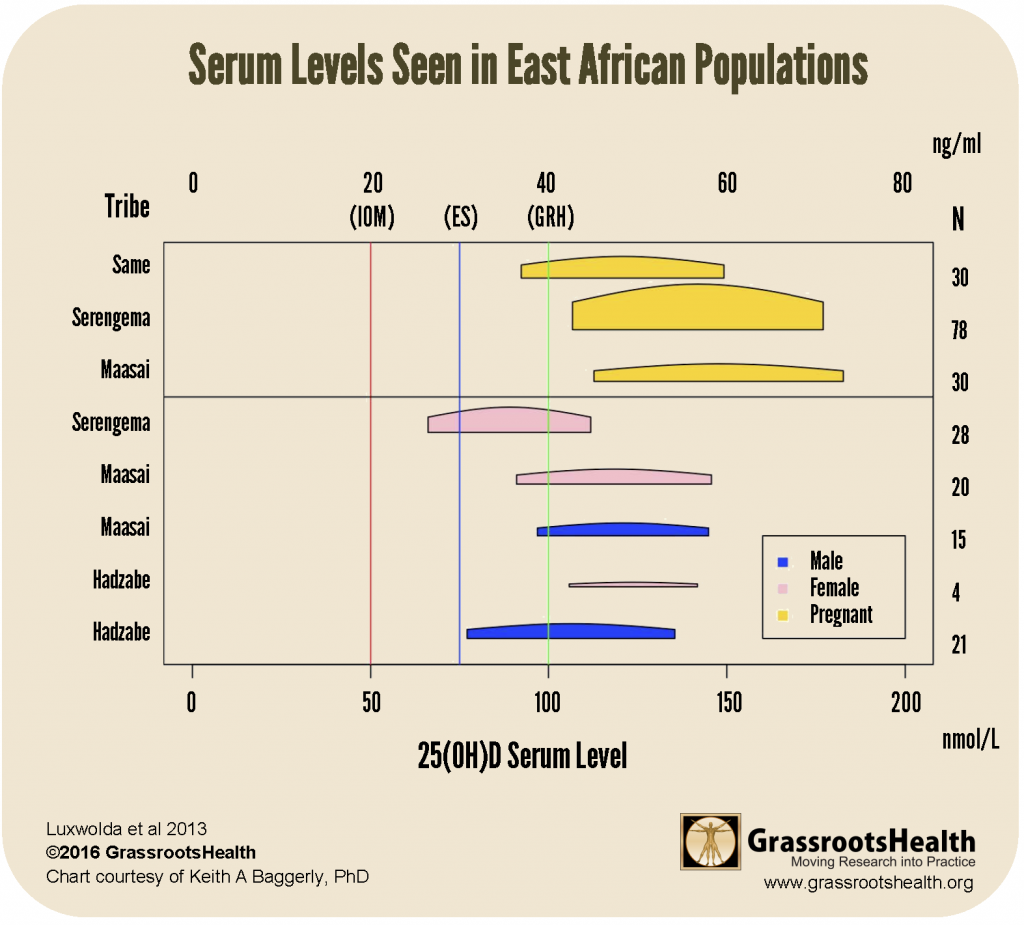 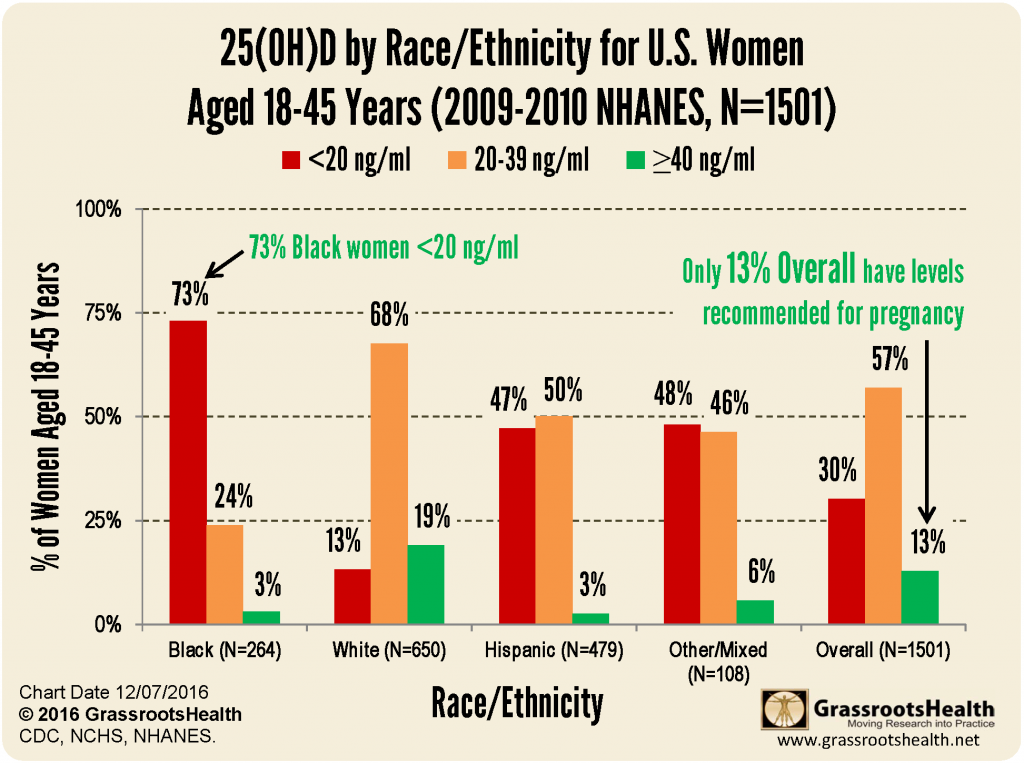 93 surfing or skateboarding individuals in Hawaii were tested for vitamin D status. These participants self-reported at least three hours of sun exposure per day for 5 or more days per week during the previous 3 months. The surfers typically had near-total body exposure, but the skateboarders had only hands, arms, and head exposed. The range of vitamin D levels was 11-71 ng/ml (28-178 nmol/L). This paper did not report on the mean vitamin D level of this group, but instead was seeking to find the optimal vitamin D nutritional status, which it deemed to be above 40 ng/ml (100 nmol/L). They concluded that even sun seekers could not achieve this ideal status if they were covered all the time.

GrassrootsHealth studied San Diego area lifeguards at the end of the summer and found the following results. Note that most reported regular use of sunscreen. 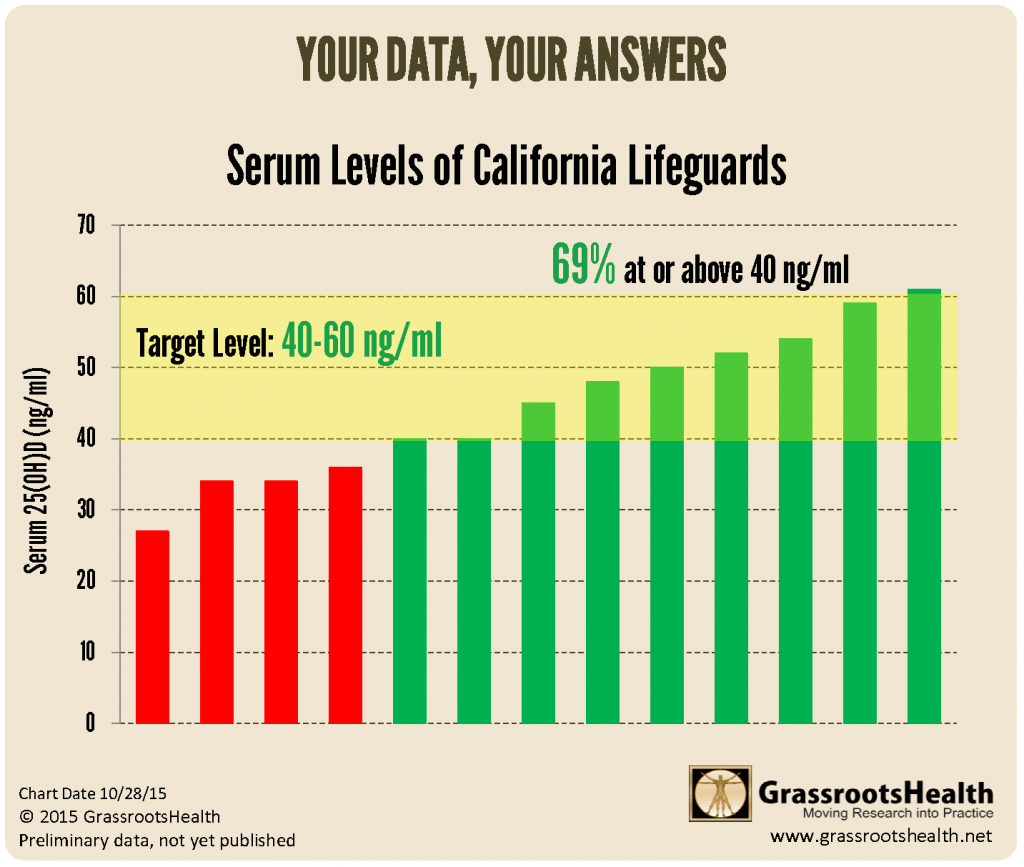 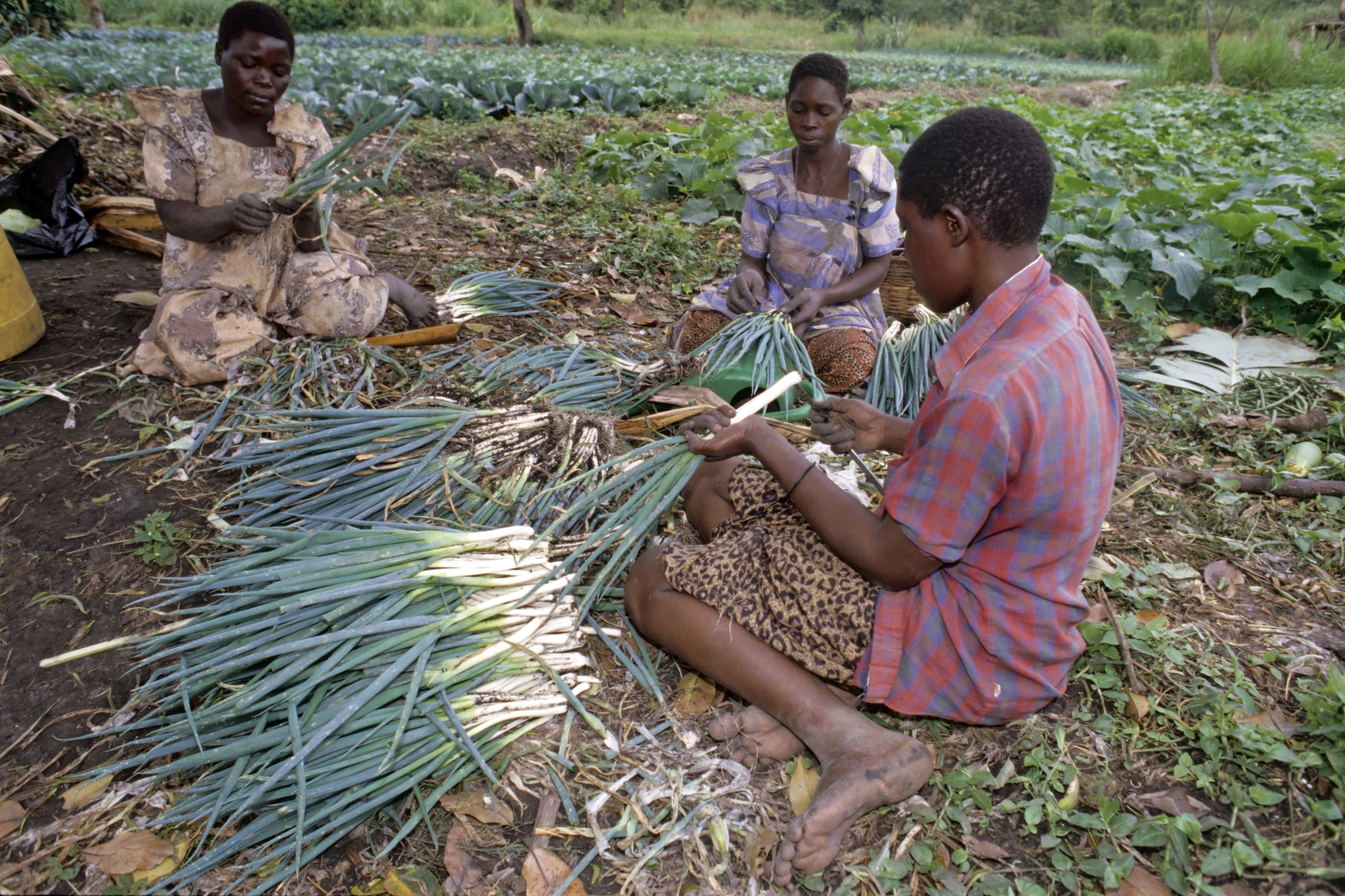