Vitamin D levels greater than 40 (as compared to the population average of 25 ng/ml) reduce the risk of BOTH mother’s pregnancy outcomes and baby’s health outcomes. Our Protocol in ACTION!

A new standard of care for pregnant women should include:

Learn how we successfully implemented this program at the Medical University of South Carolina.
View MUSC Protocol 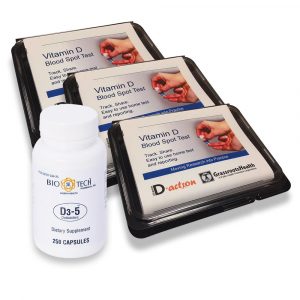 Register to have your vitamin D levels tracked throughout your pregnancy, and be an important part of this project to solve the vitamin D deficiency epidemic affecting pregnant women and babies.

Why do we believe in this research? Rates of Vitamin D Deficiency in US Women of Childbearing Age

Frequency of Serum Level and Hypertensive Disorders of Pregnancy

Every mother that comes to one of their clinics for treatment, thousands of mothers per year, has a 25(OH)D test during their first prenatal visit (typically 12-14 weeks gestation). After reviewing the results, their OB may recommend supplementation to increase vitamin D levels, usually starting with 5000 IU vitamin D / day (their average entry vitamin D level is 20 ng/ml or below). Vitamins are free to patients under the program, thanks to the sponsorship of Bio-Tech Pharmacal, Inc. The OBs continue to monitor blood levels to ensure > 40 ng/ml throughout the pregnancy, typically testing again at 24-28 weeks and again at 34 – 36 weeks.

Note: Before the project began, 80% of all their patients and 100% of their African American patients were below 40 ng/ml.

Education of all of their OBs, over 20 doctors and health care providers, has occurred through free online continuing medical education (CME) courses provided by GrassrootsHealth. Educating and bringing the whole staff at MUSC up to speed was an important part of the project, so that all of the staff could buy into the new standard of care.

Educational materials are also provided for the mothers to help them understand the importance of taking their supplements. An onsite project manager assists in the education and follow through of all aspects of the program with staff and patients.

Rickets is on the Rise

Children being taken away from parents by CPS – when vitamin D deficiency is to blame.

Because rickets had been so rare, many doctors practicing just ten years ago had never seen a case in person and today many still don’t recognize it when they do see it. There have been several cases where children have been pulled away from their families by child protective services (CPS) due to undiagnosed rickets. The children are brought into a medical facility for some treatment (sickness, disease) and broken bones or signs of healing bones are found and presumed to be a result of abuse. At this point CPS is contacted and sometimes the children taken away.

Recently Wagner consulted on such a case where twin 6 month old boys (and their 3 older brothers) were removed from their loving home because of a broken rib and threat of child abuse. The mother was severely vitamin D deficient during pregnancy, and after, and solely breast fed the twins. Vitamin D tests for the twins showed their levels to be < 10 ng/ml. After much work by Wagner and their lawyer the children are now back with their family – and hopefully the whole family is getting sun and supplementation.

Dr. John Cannell, of The Vitamin D Council, has also consulted on such cases. He describes two different, yet similar, cases on his web site.

“We have been aware of the vitamin D deficiency state in the vast majority of our Caucasian patients and almost all our Black patients for far too long. Now the evidence has accumulated of the high price we pay in terms of prematurity and other obstetrical complications from our failure to systemically address these deficiencies in maternal vitamin D levels. It is time to change, to get ahead of the curve.”

If you are a representative of a medical institution – contact [email protected] We will help you implement Protect Our Children NOW! in your institution!

The 21st Century Revolution in Pregnancy

All Breastfeeding Women Should Supplement with 6400 IU Vitamin D Daily

GrassrootsHealth and the Medical University of South Carolina co-authored a research paper, published on November 10, which finds that...

How is sunshine good for me? Sun exposure is good for our bodies as long as we don’t burn....

The Top 10 Vitamin D Myths: What’s Fact and What’s Not?

Learn more about several vitamin D misconceptions; these posts answer a majority of the questions we receive on a...

Results from vitamin D trial at MUSC - with over 1,000 pregnant women testing and taking vitamin D throughout...