On March 27, 2018, the FDA was petitioned to authorize a health claim about vitamin D’s demonstrated performance with the risk reduction of preterm births. If approved, the use of such a claim could substantially speed up the implementation of testing and use of vitamin D with all pregnant women.

This is a major step with our ‘Moving Research into Practice’ for the reduction in preterm births. A randomized controlled trials (RCT) was done, and a 2-years of a field trial at the Medical University of South Carolina (MUSC). Both demonstrated what happens when pregnant women’s blood levels are raised to at least 40 ng/ml (100 nmol/L) during their pregnancies (the sooner the better). The first publication of results showed a 60% reduction in preterm births associated with vitamin D levels at or above 40 ng/ml, as compared to those with vitamin D levels less than 40 ng/ml. 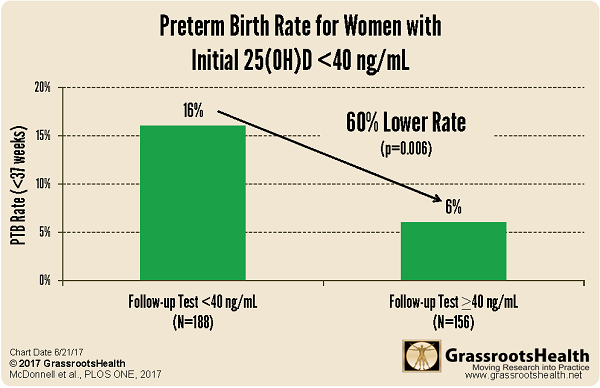 There is a distinct racial disparity in preterm birth, which could be due partially to vitamin D.  It typically takes a dark black person 2.5 times the amount of time in the sun to make the same amount of vitamin D as a light-skinned person, people with darker skin tend to have higher rates of vitamin D deficiency.

In the MUSC field trial cohort, the preterm birth rate was 10% for white women, 15% among all non-white women, and 19% for black women. 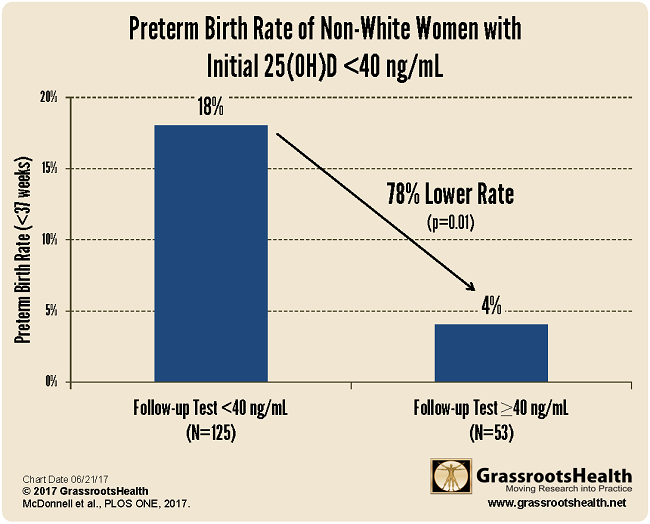 For non-white women who received two vitamin D tests during their pregnancy (one at their first prenatal visit, another after they followed the new vitamin D protocol), there was a 78% lower preterm birth rate for those that raised their vitamin D levels, by the second test, above 40 ng/ml (100 nmol/L), as compared to those that remained below 40 ng/ml throughout their pregnancy.

80% Lower Risk for Women with History of Preterm Birth

An additional analysis of the field trial data looked at gestational age at birth relating to vitamin D serum levels during pregnancy for women with a history of preterm birth.  These women have an increased risk of preterm birth with subsequent pregnancies, and so this subgroup was of particular interest.   Of this subgroup, those who raised their vitamin D levels above 40 ng/ml (100 nmol/L) were 80% less likely to have a preterm birth than those who had levels below 20 ng/ml. 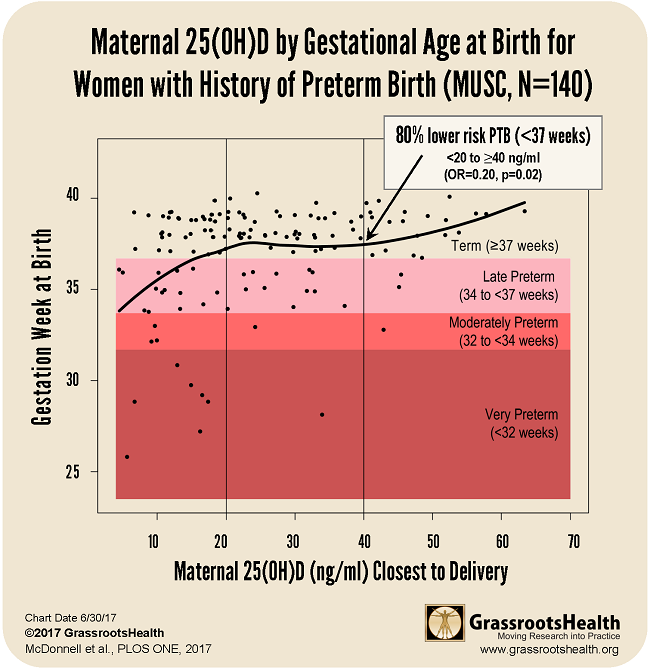 Below is a chart that shows results from both the MUSC cohort (N=1,064) and the Hollis and Wagner et al. RCT cohort (N=509) with confidence bounds.  In both sets of data, there was a steady increase of gestation time correlating to the rise of 25(OH)D, which reached a plateau around 40 ng/ml. 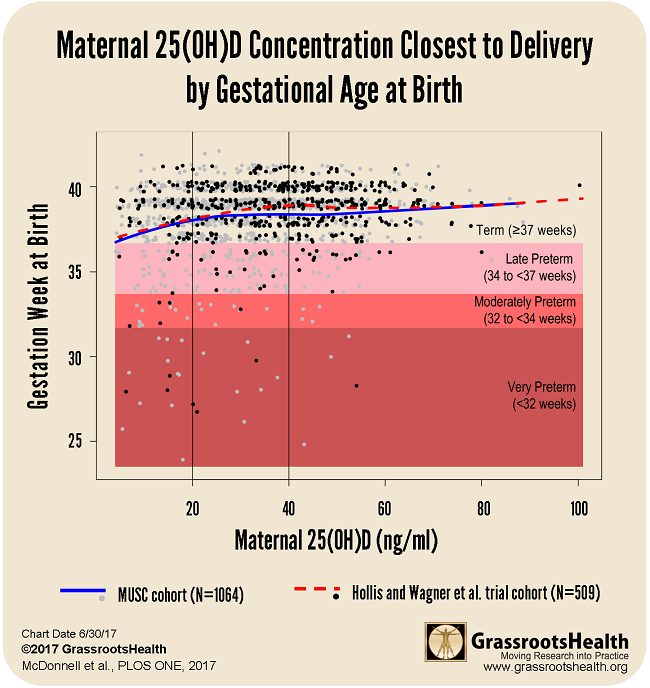 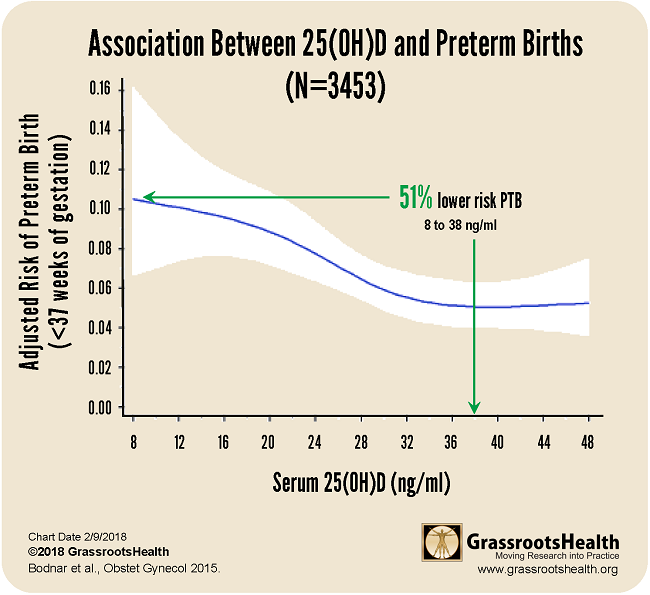 Since there is 1 preterm birth approximately every 90 seconds in the US, it truly is time to act!

The Organic & Natural Health Association has taken the lead to assemble the necessary partners including GrassrootsHealth, the participants at MUSC, insurance providers, and government representatives to produce the petition for the FDA. As noted in the publications from both the RCT and the field trial, there were no safety issues associated with the use of vitamin D. Vitamin D is easily available from the sun (in the right latitudes and seasons) and supplements are readily available and relatively inexpensive. 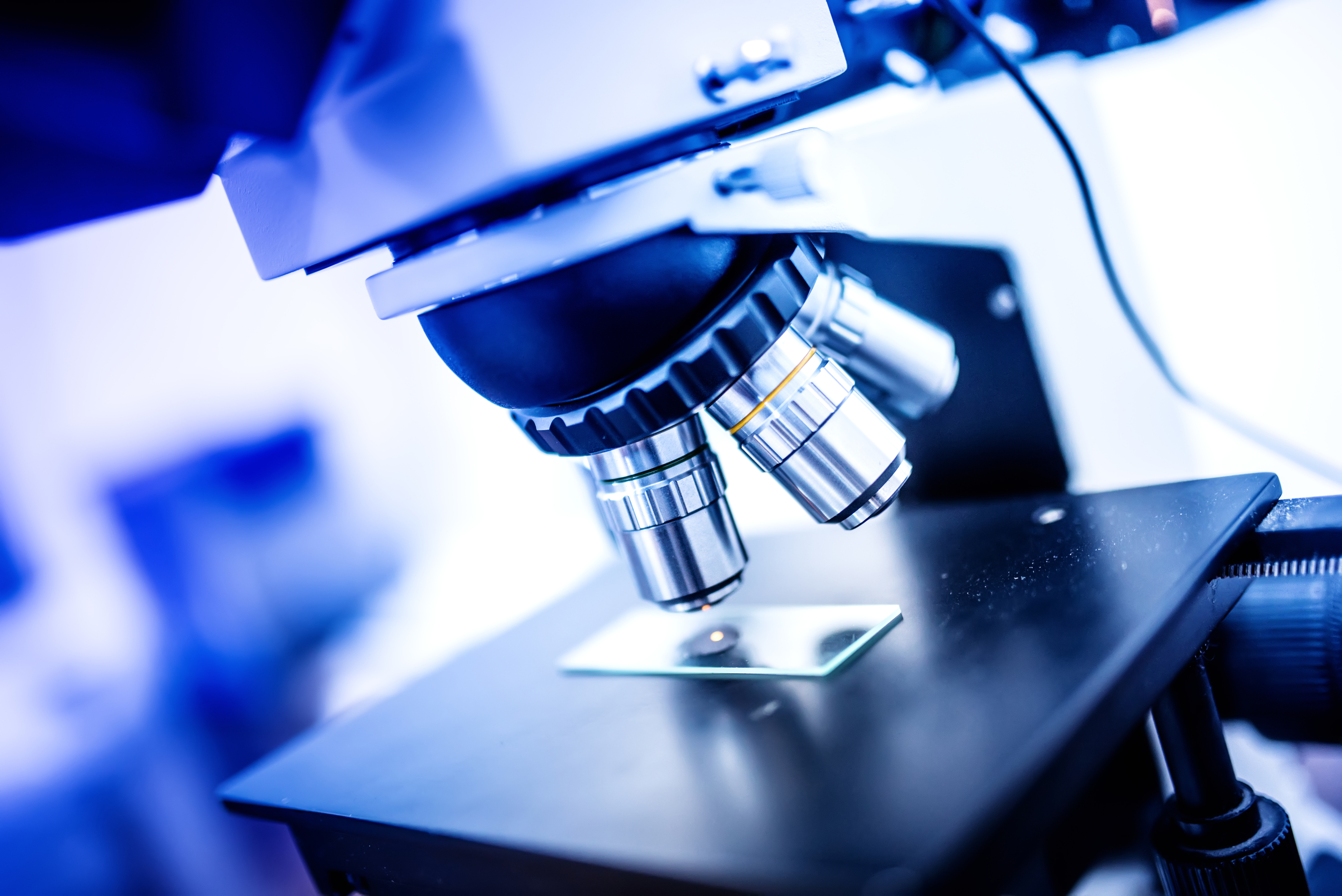