Sunshine has many benefits for human health, and a lack of sunshine exposure can lead to increased risk of many diseases

While modern lifestyles keep many indoors and out of midday sunshine most days of the year, sensible sunshine exposure has been shown to have a positive impact on health and can help protect against disease, helping people live longer. In fact, the known health risks associated with low vitamin D levels and lack of sun exposure are summarized by many, including Hoel and De Gruijl, who conclude that moderate UV exposure from the sun, without burning, is a health benefit and should be recommended as such.

A 2020 review of studies on the health effects of sunshine by Alfredsson et al. indicated that 340,000 deaths per year in the United States and 480,000 deaths per year in Europe, as well as a rise in many diseases, could be attributed to insufficient sun exposure or “sunshine deficiency.” These diseases include cancer (especially breast and colon cancer), hypertension, cardiovascular disease, metabolic syndrome, multiple sclerosis (MS), Alzheimer’s disease, autism, asthma, type 1 diabetes, and myopia.

The infographic below illustrates some of the different diseases affected by a lack of sunshine and vitamin D. While health concerns resulting from sunshine deficiency may be due to deficiency of vitamin D from lack of UVB exposure, they could also be attributed to an inefficient release of nitric oxide from sun exposure and other physiological benefits from the sun and its wide range of solar radiation. The following is a breakdown of research linking several health conditions to “sunshine deficiency.”

Sunshine Avoidance Can Lead to an Early Death In a following 2016 analysis of the same group of women, Lindqvist et al. found that avoidance of sunshine resulted in a shorter life expectancy comparable to the shortened life expectancy of smokers. Compared to those with the highest sun exposure, life expectancy for women who avoided sun was shorter by 0.6 to 2.1 years.

The lead author, Dr. Pelle Lindqvist, put it another way,

“We found smokers in the highest sun exposure group were at a similar risk as non-smokers avoiding sun exposure, indicating avoidance of sun exposure to be a risk factor of the same magnitude as smoking.”

Sunshine Exposure Reduces the Risk of Many Diseases A study published by Weller et al. in 2020 tested if environmental UV exposure had an effect on systolic blood pressure (SBP) in a cohort of over 340,000 chronic hemodialysis patients and found that temperature, UVA, and UVB light were all inversely related to SBP. In addition, the authors found that pre-dialysis SBP varied by season and was approximately 4 mm Hg higher in black patients than white patients. The results of this study raise the concern that insufficient sun exposure may be a risk factor for hypertension in the general population, and even more so for the black population.

A study from Harvey et al. found that the incidence of death from heart attack in Sweden, over the time frame of 1987 through 2009, varied by season and latitude. (The range of latitude in Sweden is from 55-69°N.) For men, every 1° of latitude northwards corresponded with a 1.3% increase in death related to heart attacks; for women, a 0.6% increase. Additionally, the incidence of death from heart attacks was highest in the winter months and lowest in the summer months.

A study by Gao et al. looked at data from 1192 participants aged 60 years and older and residing in rural China who provided information about their long-term sun exposure behaviors including time of day when outdoors, duration outdoors, and use of sun protection. The research team used the Mini-Mental State Examination (MMSE; maximum score of 30) to assess participant’s orientation, memory, language, calculation, and attention. They found that participants in the high sun exposure group had higher average mental state scores of cognitive function compared to participants in the medium or low exposure groups. This study concluded that long-term high sun exposure throughout life could reduce the risk of cognitive impairment in the later years of life. Results from Tremlett et al. from the Nurses’ Health Study found that people living in high UVB areas before the onset of MS had a 45% lower risk of MS compared to those living in low UVB areas, and those who spent 10 or more hours per week outdoors in the summer in high UVB areas during ages 31-40 had an 82% lower risk of MS compared to those who spent less than 10 hours per week outdoors in low UVB areas. Other age groups also showed a decreased risk.

A study by Gallagher et al. examined whether higher levels of ambient UV exposure were associated with a lower risk of MS among almost 40,000 radiologic technologists. The researchers found that those with the highest lifetime UV exposure in the winter had an almost 50% lower risk of MS compared to those with the lowest. Sebastian et al. found that children who spent more time outdoors in the summer sunshine had a decreased risk of developing MS compared to those who spent less than 30 minutes outdoors in the summer sunshine, with evidence of a dose-response relationship. The authors concluded “If this is a causal association, spending more time in the sun during summer may be strongly protective against developing paediatric MS, as well as residing in a sunnier location.”

Zivadinov et al. found that increased sun exposure was also related to increased whole brain volume and increased grey matter, even after adjusting for vitamin D level. This indicates that sun exposure, and not just vitamin D from sun exposure, may be a direct contributing factor to brain health and MS diagnosis and progression.

A 2020 study by Hedström et al. provided further evidence that low sun exposure increased the risk for MS. Results indicated both a direct effect of sunlight exposure as well as an indirect effect, through the synthesis of vitamin D, on the risk of MS. These findings support the relevance of sunshine exposure and its effect on vitamin D status, both together and separately, for the prevention of MS, and are especially relevant for those with a genetic predisposition to MS.

Diabetes Incidence is Associated with Latitude

Studies have shown an association between UV exposure, vitamin D, nitric oxide, and the suppression of metabolic syndrome and diabetes development. In fact, higher rates of type 1 diabetes and several cancers are observed in the far northern and southern latitudes – locations that have lower UVB irradiance from the sun.

The incidence of infectious disease has been related to several factors, including season, temperature, humidity, and UV radiation, with certain respiratory illnesses such as the flu being especially known to increase during specific months or seasons. Some studies have also revealed a beneficial association between higher ambient UV levels and lower rates of COVID-19 deaths. A study of the 1918 flu found a general trend with lower rates of pneumonia as a complication of influenza and influenza fatalities for those locations at lower latitudes within the United States.

While research has shown a relationship between vitamin D levels and asthma, some studies mentioned by Alfredsson et al. indicate a positive correlation between an increased incidence of asthma and latitude and an association between the lung development of newborns and UV exposure of the mother. Other findings include a reduction of about 50% in the development of eczema among children exposed to higher doses of UV radiation.

A 2019 study by Holmes et al. assessed the association between sun exposure and IBD among children aged 0-17 years included 99 IBD patients and 396 controls (children without IBD). The research team found a 6% reduced risk of IBD for every 10 minutes sun exposure in the previous summer or winter. The association was stronger as age increased indicating a long-term, cumulative effect.

A study by Zhang et al. found that infants receiving vitamin D (400 IU/day) plus sunlight had better motor development scores and lower cortisol levels over the next two months compared to infants only taking vitamin D supplements (400 or 1000 IU/day) or the control group. Infants in the highest sun exposure group (7-14 hours/week) achieved the best scores and had the lowest cortisol levels.

A study by Toledo et al. looked at whole-body exposure to narrow-band UVB and its impact on mood, as well as resulting levels of vitamin D, interleukin-6 (IL-6), cortisol, and beta-endorphins (B-END). Mood was scored based on satisfaction, tiredness, wellbeing and irritation, with higher scores representing worse moods. Participants experienced significant improvements in mood over the five days following NB UVB exposure. Both vitamin D and cortisol levels were correlated with the baseline mood state, and from beginning to end of the study, vitamin D levels increased while IL-6 levels decreased.

Phototherapy has a history of being especially useful for treatment of skin disorders like cutaneous tuberculosis, eczema, and psoriasis. Niels Ryberg Finsen, the founder of modern dermatological phototherapy, won the Nobel Prize in Medicine for his discovery of phototherapy treatment for lupus vulgaris (the skin manifestation of tuberculosis) by using concentrated light rays. Finsen’s work also led to other developments in phototherapy, such as heliotherapy, which consists of a patient gradually being exposed to sunlight until they become acclimated to local sun conditions.

Additional health benefits of sunshine exposure are provided by Dr. William Grant, in his blog “The Health Benefits and Risks from Moderate Sun Exposure.”

Make Sure You are Getting Enough Vitamin D TODAY!

Having and maintaining healthy vitamin D levels and other nutrient levels can help improve your health now and for your future. Choose which additional nutrients to measure, such as your omega-3s and essential minerals including magnesium and zinc, by creating your custom home test kit today. Take steps to improve the status of each of these measurements to benefit your overall health. With measurement you can then determine how much is needed and steps to achieve your goals.  You can also track your own intakes, symptoms and results to see what works best for YOU.

Enroll in D*action and Test Your Levels Today!

The Health Benefits and Risks from Moderate Sun Exposure 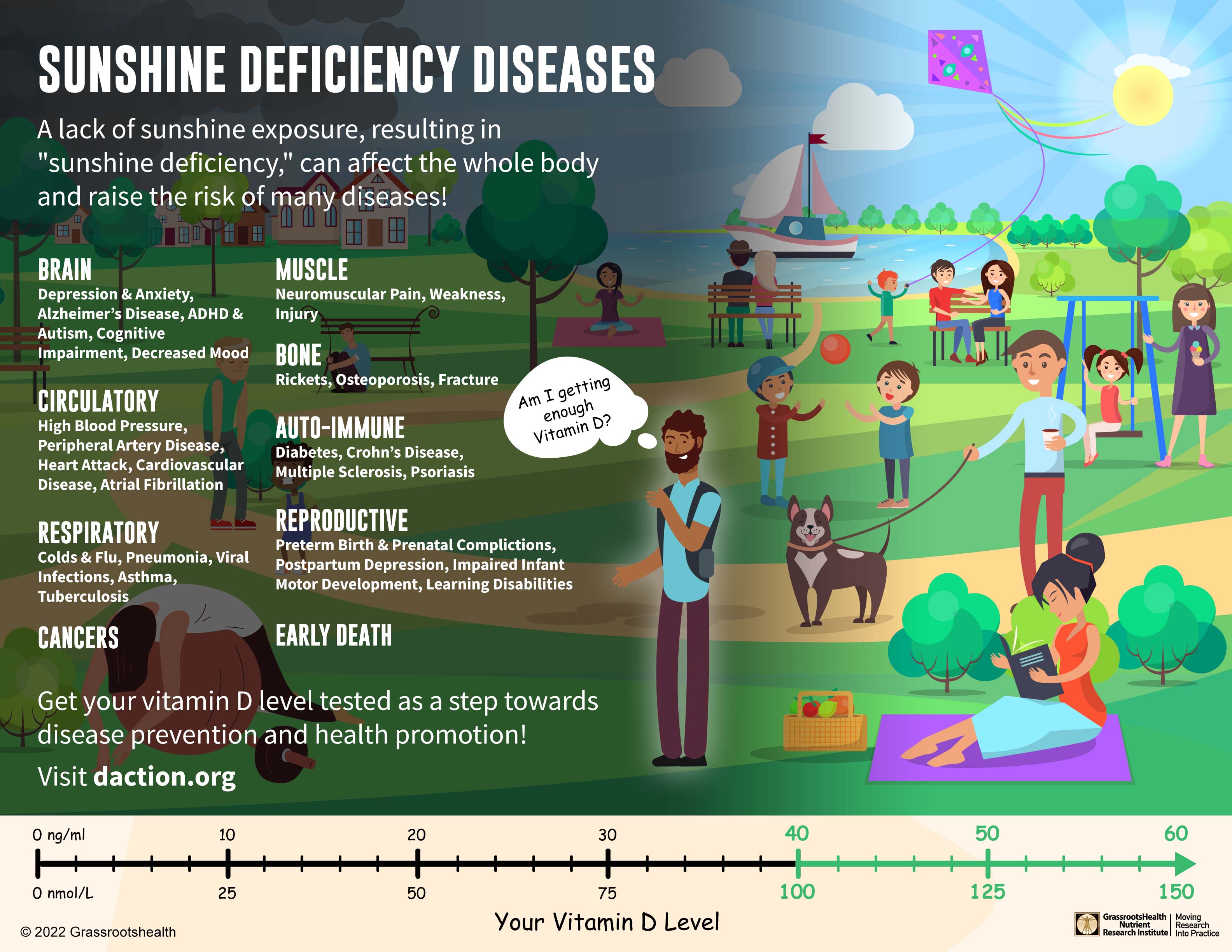